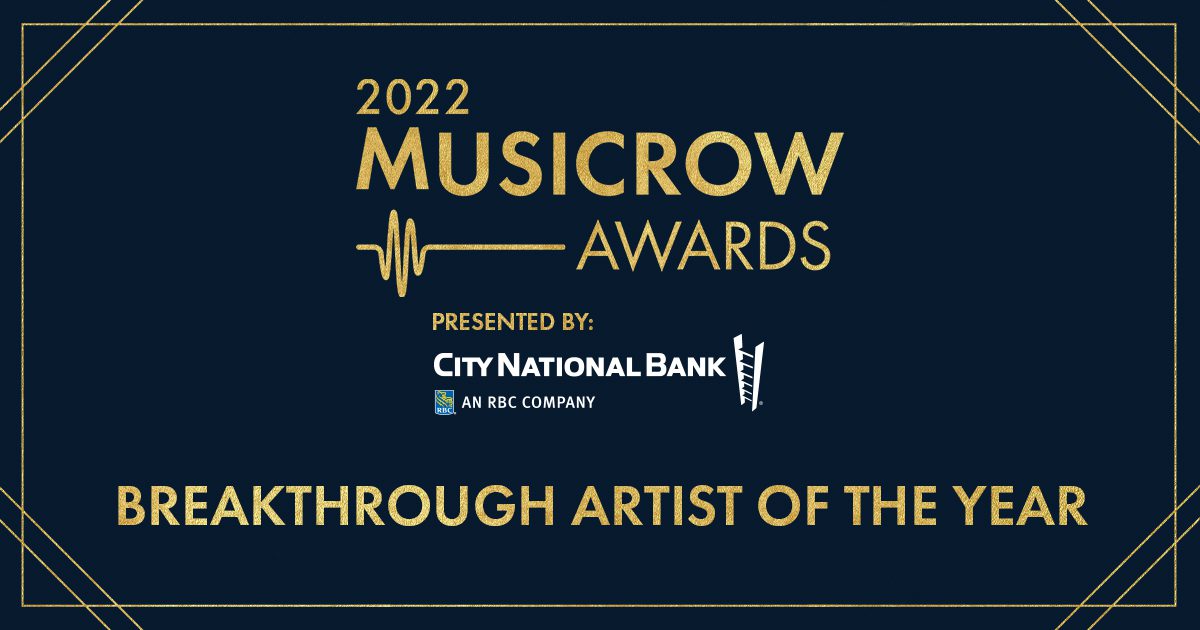 Following the announcement of this year’s nominees for the 34th MusicRow Awards, we take a look at the MusicRow Breakthrough Artist of the Year category. This category is voted on by MusicRow’s subscribed members to honor a Nashville artist who achieved significant career progress for the first time. 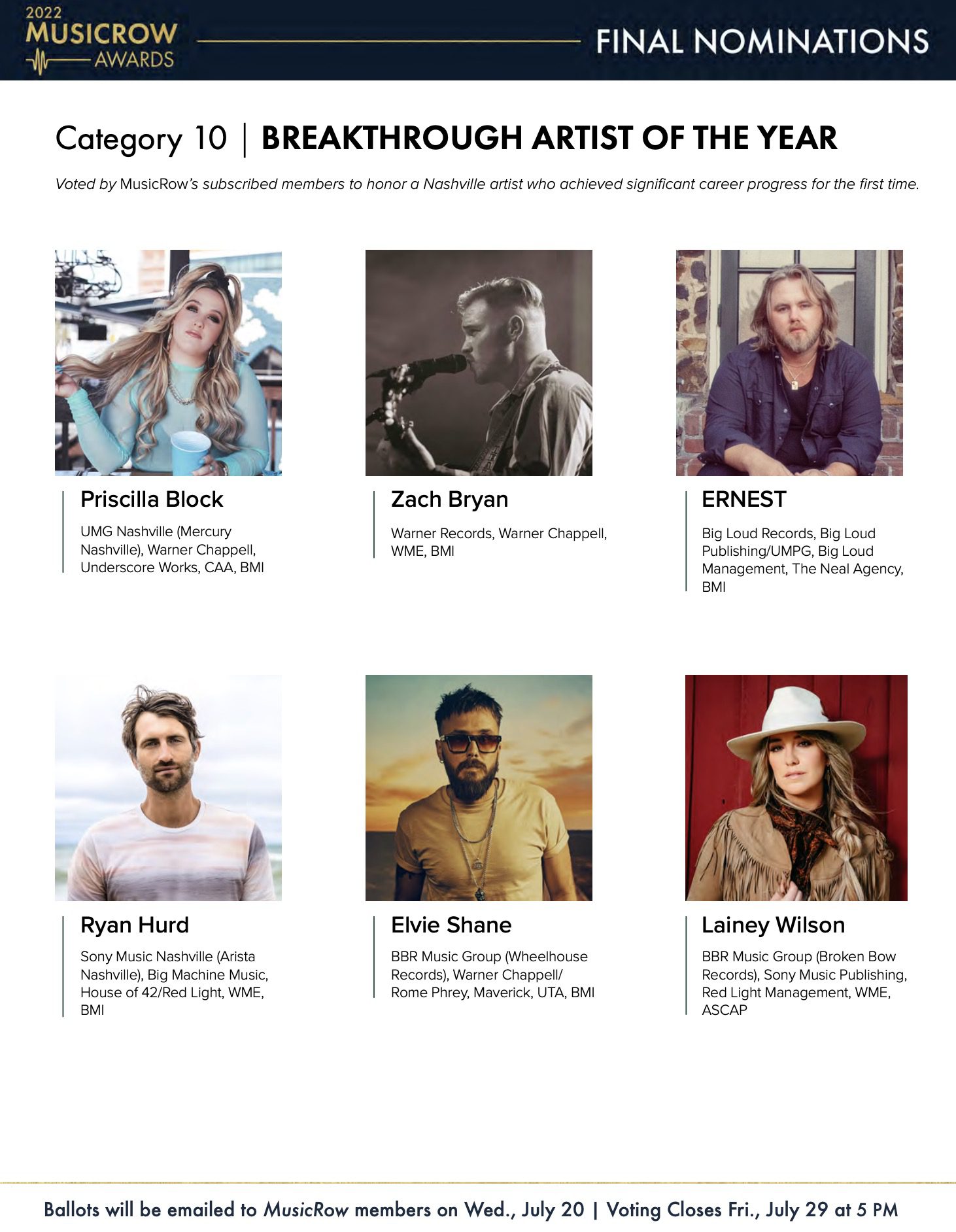 Priscilla Block made her way onto the scene after creating a fanbase on TikTok. After posting snippets of funny and honest tracks such as “Thick Thighs” and “PMS,” Block had her viral moment with the heartbreak anthem, “Just About Over You.” Fans rallied together to independently fund Block’s recording of the track, and its reception led to industry attention. She soon signed a record deal with Mercury Nashville and released her debut album, Welcome to the Block Party. Block has since surpassed more than 385 million digital streams with tracks such as “Just About Over You,” “Wish You Were the Whiskey,” “I Bet You Wanna Know,” and her current single, “My Bar.” Her charm and wit also allowed her the opportunity to host the red carpet programming at the ACM Awards, where she was nominated for New Female Artist of the Year. Block is also nominated for Breakthrough Artist-Writer at this year’s MusicRow Awards for her qualifying song, “Just About Over You.”

Zach Bryan has impacted the country music industry in a nontraditional but massive way. The Oklahoma native began releasing music as an active-duty member of the U.S. Navy stationed in Washington state. After making an impact with “Heading South” in 2019, his music caught the attention of Yellowstone creators, leading to multiple sync placements in the hit show. After being honorably discharged by the Navy after eight years of service to pursue his career in music, Bryan signed to Warner Records. He released his debut album American Heartbreak to unfathomable acclaim. The massive 34-song project broke the 2022 record for the most-streamed country album in a single day on Spotify and Apple Music. Bryan’s single from American Heartbreak, “Something in the Orange,” peaked at No. 11 on the Billboard Hot Country charts and was No. 18 global streaming track overall. The breakthrough star has already surpassed 1 billion global career streams and is only three years past his very first release.

ERNEST has enjoyed massive success as a songwriter in the past few years, having written five No. 1 hits for artists such as Morgan Wallen, Chris Lane, Sam Hunt, Florida Georgia Line, and Kane Brown. After releasing a few EPs and singles as an artist, ERNEST broke through with his George Jones-inspired “Flower Shops” featuring Wallen. The song took off, becoming the most-added single on its add week at country radio and hitting No. 1 on MusicRow‘s CountryBreakout Radio Chart. “Flower Shops,” which is also nominated for Song of the Year this year at the MusicRow Awards, also led to the release of ERNEST’s Big Loud Records debut album Flower Shops (The Album). ERNEST is out building his fanbase on the road with other fan favorites from the album such as “Some Other Bar,” “Tennessee Queen,” and “Feet Wanna Run.”

Ryan Hurd got his start in Nashville as a songwriter, penning Platinum hits and chart toppers for Blake Shelton, Luke Bryan, Lady A, Tim McGraw, and more. As an artist Hurd has released a series of EPs and singles, including the Platinum-certified “To a T.” His breakthrough as artist was cemented with his debut album from Arista Nashville, Pelago. The 15-track project contained “Chasing After You,” a duet with his wife Maren Morris that hit the top of the charts, was certified Platinum, and secured him his first Grammy nomination for Best Country Duo/Group Performance. He’s following it up with his new single “Pass It On,” which was one of the most-added singles at country radio on add week. As a songwriter, Hurd is also up for the Song of the Year title at this year’s MusicRow Awards for Morris’ “Circles Around This Town,” which he co-wrote with her, Jimmy Robbins, and Julia Michaels.

Elvie Shane captured hearts with “My Boy,” a special tribute to his step-son and non-traditional families like his. The track quickly caught fire on TikTok, leading BBR Music Group to sign him to Wheelhouse Records. Now aligned with a label partner, Shane took “My Boy” to No. 1. The now Platinum-certified track was nominated for Song of the Year at last year’s MusicRow Awards. Following the success of “My Boy,” Shane released his debut EP, County Roads, and quickly followed it up with his debut album Backslider. His new single “County Roads,” was one of the most added songs at country radio upon its debut and continues to climb. Shane is also nominated for Breakthrough Artist-Writer of the Year this year at the MusicRow Awards as a co-writer on “My Boy.”

The State of the Race – And So it Begins