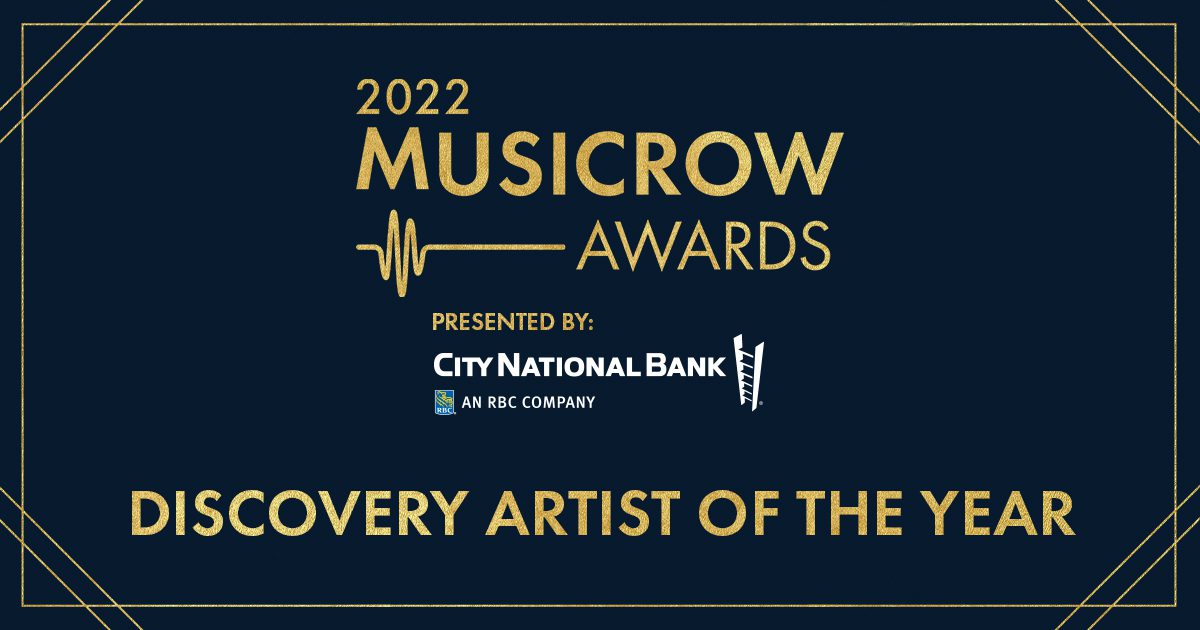 Following the announcement of this year’s nominees for the 34th MusicRow Awards, we take a look at the MusicRow Discovery Artist of the Year category. The award will honor a Nashville developing artist who demonstrates significant talent and potential to rise. 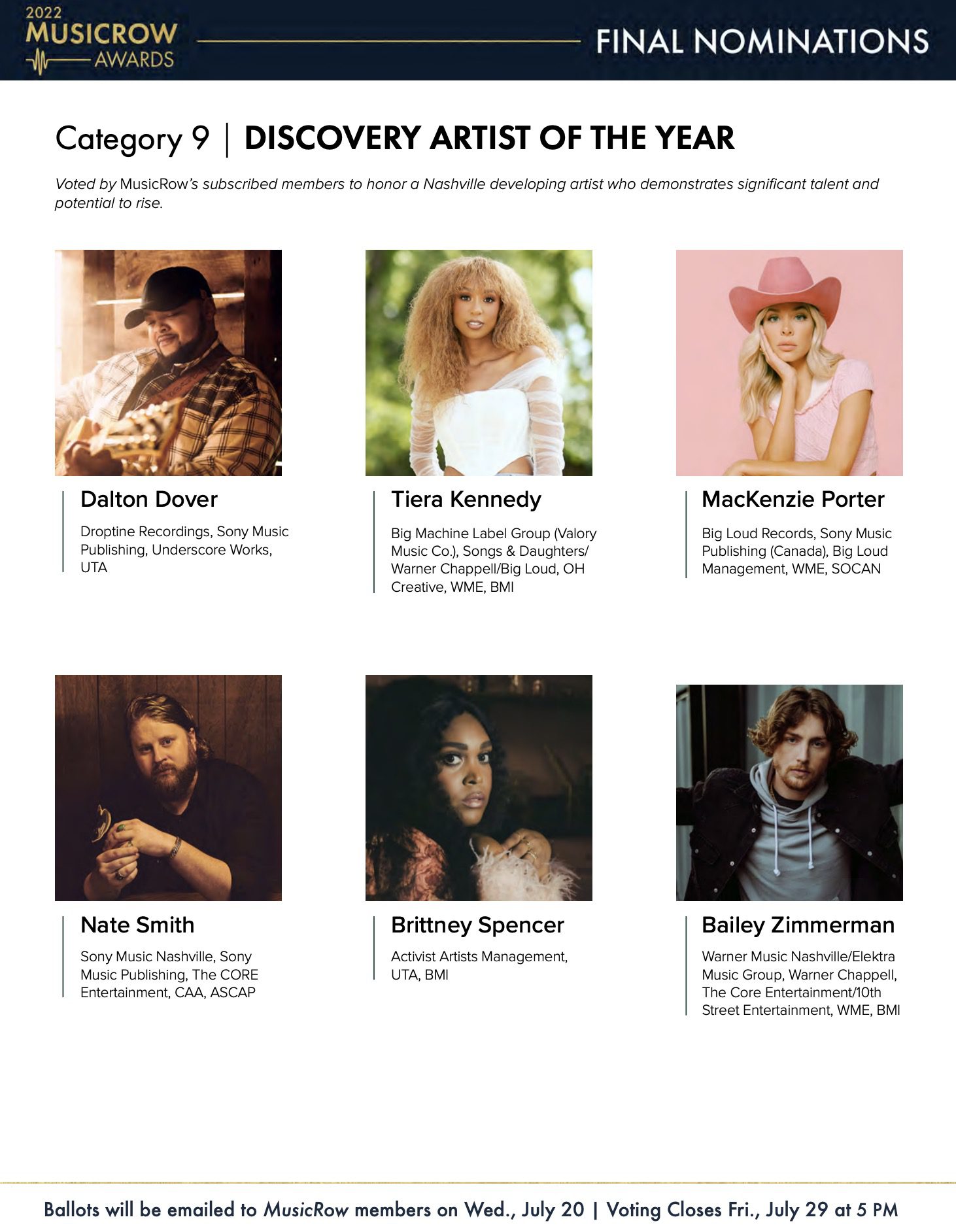 Dalton Dover grew up in a small town in Georgia listening to Keith Whitley, Rhett Akins, Joe Diffie and Steve Wariner. Inspired by the honesty in country lyrics, Dover began singing at church and in school talent shows. He soon started performing at local bars and uploading covers on TikTok. His videos caught the attention of producer Matt McV and A&R veteran Jim Catino, who quickly signed Dover. Since then, Dover has released tracks such as “You Got A Small Town,” “Baby I Am,” and “Hear About A Girl” via Catino’s Droptine Recordings, garnering a massive amount of streams. Dover still resides in his small Georgia town with his wife and two kids, but the talented singer continues to earn the gaze of the industry as he releases track after track of country confection.

Tiera Kennedy continues to rise in the industry with her brand of R&B-flavored country. After becoming the flagship writer for Nicolle Galyon’s Songs & Daughters publishing venture with Big Loud and Warner Chappell, Kennedy independently released her self-titled, five-song EP. With tunes such as “Found It In You,” “Shut It Down,” and “Miles” featuring BRELAND, she attracted Big Machine Label Group and was signed to The Valory Music Co. She has since made her Grand Ole Opry debut, become the host of her own Apple Music Country show, and found herself on multiple artist-to-watch lists. After earning more than 16 million streams on her romantic song “Found It In You,” Kennedy tapped Producer of the Year nominee Dann Huff to reinvigorate the track and shipped it to country radio in June.

MacKenzie Porter has already made her mark in the Canadian country market, having earned five No. 1 songs up north. After moving to Nashville in 2014, her hard work began to pay off when, in 2020, she began to release pop-country tracks such as “These Days” and “Seeing Other People” via Big Loud Records. In the spring of 2021, Porter was recruited by country star Dustin Lynch as his duet partner on “Thinking ‘Bout You.” The track became a six-week No. 1, and made history as the longest-running Top 10 single at 27 weeks since the Billboard Country Airplay chart launched in January 1990. As the massive duet was introducing Porter to country radio, the talented singer continued to release tracks to massive streaming appeal, such as her newest single “Pickup.” The tune has already hit No. 1 up north with over 22 million streams across the U.S. and Canada.

Nate Smith has the kind of voice that can make any heard turn. The powerful singer with a unique vocal tone first attracted industry attention with his debut EP Reckless and the popular single “Wildfire,” inspired by a devastating fire that struck his home of Paradise, California and destroyed everything he owned. He followed the success of “Wildfire” with “Sleeve” and “Under My Skin,” which has amassed over 55 million on-demand streams to date. After aligning with Sony Music Nashville in November, Smith shipped the single “Whiskey On You” to country radio and nabbed the second most-added title of the week with 45 first week stations, further proving a hunger for Smith’s music. He also collaborated with label-mate Tenille Townes on the romantic “I Don’t Wanna Go To Heaven.”

Brittney Spencer first made waves when she posted a cover of The Highwomen song “Crowded Table.” Band members Amanda Shires and Maren Morris reposted the video and then invited her to perform with them. Since then Spencer has become a buzz-worthy figure in the music industry, making her Grand Ole Opry debut in May of 2021 and performing with Mickey Guyton on the CMA Awards by November. While the talented singer has initially made her mark as a performer, she’s also released very well-crafted, meaningful songs, such as “Sober & Skinny,” “Sorrys Don’t Work No More,” and “Compassion.” She’s also grown a robust fan base on the road, having performed with Jason Isbell & The 400 Unit and Reba McEntire. Throughout 2022 Spencer will be opening for everyone from Willie Nelson and Brandi Carlile to Maren Morris and Megan Thee Stallion.

Bailey Zimmerman burst onto the scene as a streaming powerhouse. The singer first gained popularity after releasing a gritty acoustic cut of “Never Comin’ Home,” which led to his over 1 million followers on TikTok. After garnering nearly 100 million global streams with more independently released tunes such as “Small Town Crazy” and “Fall In Love,” Zimmerman signed to Warner Music Nashville and Elektra Music Group. In June, Zimmerman’s appeal paired with his new label partners led to another massive release with “Rock and A Hard Place.” The breakup track taps into the country and rock fusion that Zimmerman is becoming known for, and debuted at No. 1 on Billboard’s Country Streaming Songs and Country Digital Song Sales charts, No. 2 on their Hot Country Songs chart, and No. 24 on their all-genre Hot 100 chart.

Become A Member To Vote In 2022 MusicRow Awards