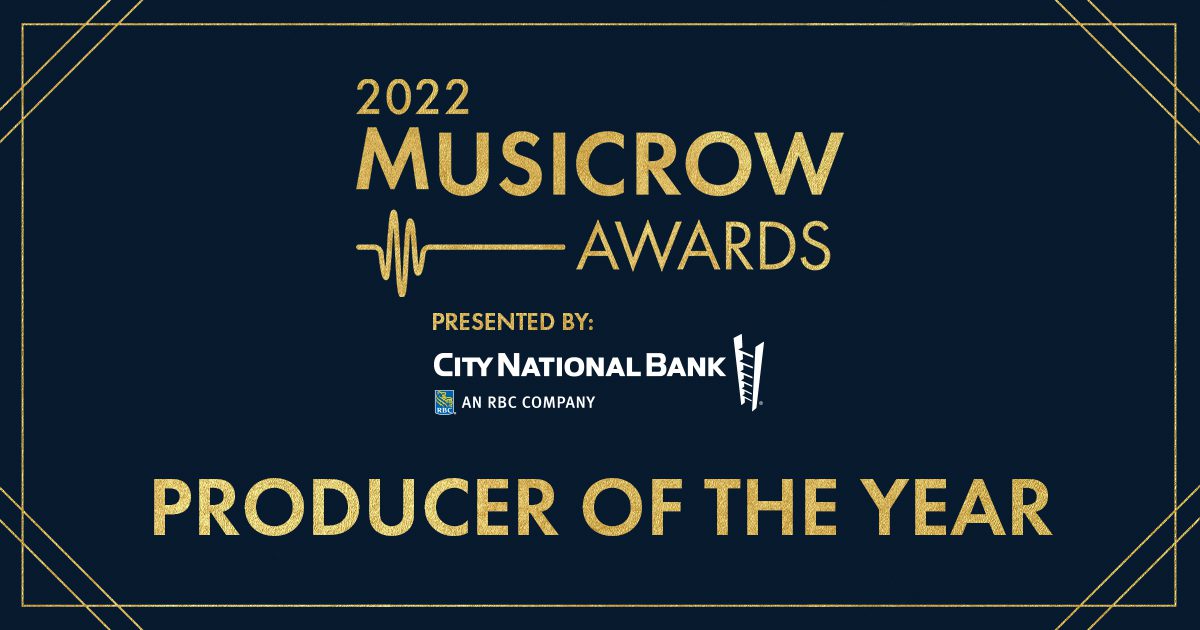 Following the announcement of this year’s nominees for the 34th annual MusicRow Awards, we take a closer look at the Producer of the Year category. This visionary class of nominees created up some of country music’s most innovative projects during the eligibility period of June 1, 2021 to May 31, 2022.

Zach Crowell lent his production talent to Cole Swindell’s eleventh career No. 1 “Never Say Never” with Lainey Wilson, as well as buzzy singles from Chris Janson (“Bye Mom,” “Keys To The Country”), and Conner Smith (“I Hate Alabama,” “Learn From It”). He co-produced Dustin Lynch’s record-breaking, six-week No. 1 with MacKenzie Porter, “Thinking ‘Bout You,” as well as the rest of Lynch’s 2022 album, Blue In The Sky. Crowell is currently racing up the charts with Swindell’s hot new single “She Had Me At Heads Carolina,” which pays homage to Jo Dee Messina’s 1996 hit, “Heads Carolina, Tails California.” This is Crowell’s second time being nominated in the Producer of the Year category at the MusicRow Awards.

Dann Huff, a five-time winner in the Producer of the Year category, produced hits from Thomas Rhett, Kane Brown, and Lady A this year. Alongside Rhett and other co-producers, Huff helmed Rhett’s 2021 album Country Again: Side A (containing the hits “What’s Your Country Song” and “Country Again”) as well as Rhett’s 2022 album Where We Started (containing “Slow Down Summer.”) For Lady A, Huff produced their eighth studio album What A Song Can Do, including the title track single and “Like A Lady.” Huff also produced Artist of the Year nominee Brown’s recent string of hits, such as “Worldwide Beautiful,” “One Mississippi,” and “Like I Love Country Music.” Additional recent production credits for Huff include projects for Catie Offerman, Dillon Carmichael, Laci Kaye Booth, Morgan Evans, and Runaway June.

Jay Joyce produced a variety of projects for Eric Church, Lainey Wilson, Brothers Osborne, Chase Rice, Gary Allan, Charlie Worsham, LANCO and more this year. Church rode the wave of his highly successful, Joyce-produced triple album, Heart & Soul, which was released at the beginning of 2021 and generated hits such as “Hell Of A View,” “Heart On Fire,” and the rising “Doing Life With Me.” Joyce lent his talents to Breakthrough Artist nominee Wilson for her breakout album Sayin’ What I’m Thinkin’, including her first chart-topper “Things A Man Oughta Know.” His work with Brothers Osborne can be heard on their Grammy-nominated album Skeletons, including “All Night” and “I’m Not for Everyone.” Joyce is a two-time winner in the Producer of the Year category.

Shane McAnally‘s production talents, as well as songwriting prowess, were heard on multiple big projects this year. He co-produced tracks on Walker Hayes’ Country Stuff EP and album, including the blockbuster hit “Fancy Like,” and its follow up chart-burner “AA.” McAnally also worked alongside fellow Male Songwriter of the Year nominee Josh Osborne to produce Carly Pearce’s critically-acclaimed 29: Written In Stone, which boasts songs such as “Next Girl,” “Never Wanted To Be That Girl” with Ashley McBryde and her rising “What He Didn’t Do.” McAnally’s production credits this year also include music for Old Dominion, Midland, Kylie Morgan, and Tigirlily.

Joey Moi produced Morgan Wallen’s titanic Dangerous: The Double Album, which topped Billboard‘s all-genre year-end albums chart at the end of 2021 with 4.1 million units sold. The project also took home Album Of The Year at the 2021 ACM Awards, and spawned multiple No. 1 songs. Moi also solely produced Breakthrough Artist Of The Year nominee ERNEST’s debut album, Flower Shops (The Album), including the title track that is rising on the charts. Other projects Moi produced this year include HARDY’s Hixtape: Vol. 2, Jake Owen’s ninth No. 1 “Made For You,” and music for Lily Rose, MacKenzie Porter, Sean Stemaly and Larry Fleet.

Jon Randall was involved in multiple projects this past year, as a songwriter, artist and producer. He produced Miranda Lambert’s eighth solo album Palomino alongside Lambert and Luke Dick. The project spawned the hit “If I Was a Cowboy” and the rising single “Strange,” as well as fan-favorite “Actin’ Up.” Randall and Lambert teamed with Jack Ingram on the Grammy-nominated project The Marfa Tapes, sharing production credits. Randall also produced Parker McCollum’s major label debut Gold Chain Cowboy, which includes McCollum’s first and second No. 1 songs, “Pretty Heart” and “To Be Loved By You.” He also produced Chase Bryant’s debut album Upbringing. Randall released his first solo album in 15 years, a self-titled project, in mid-September.