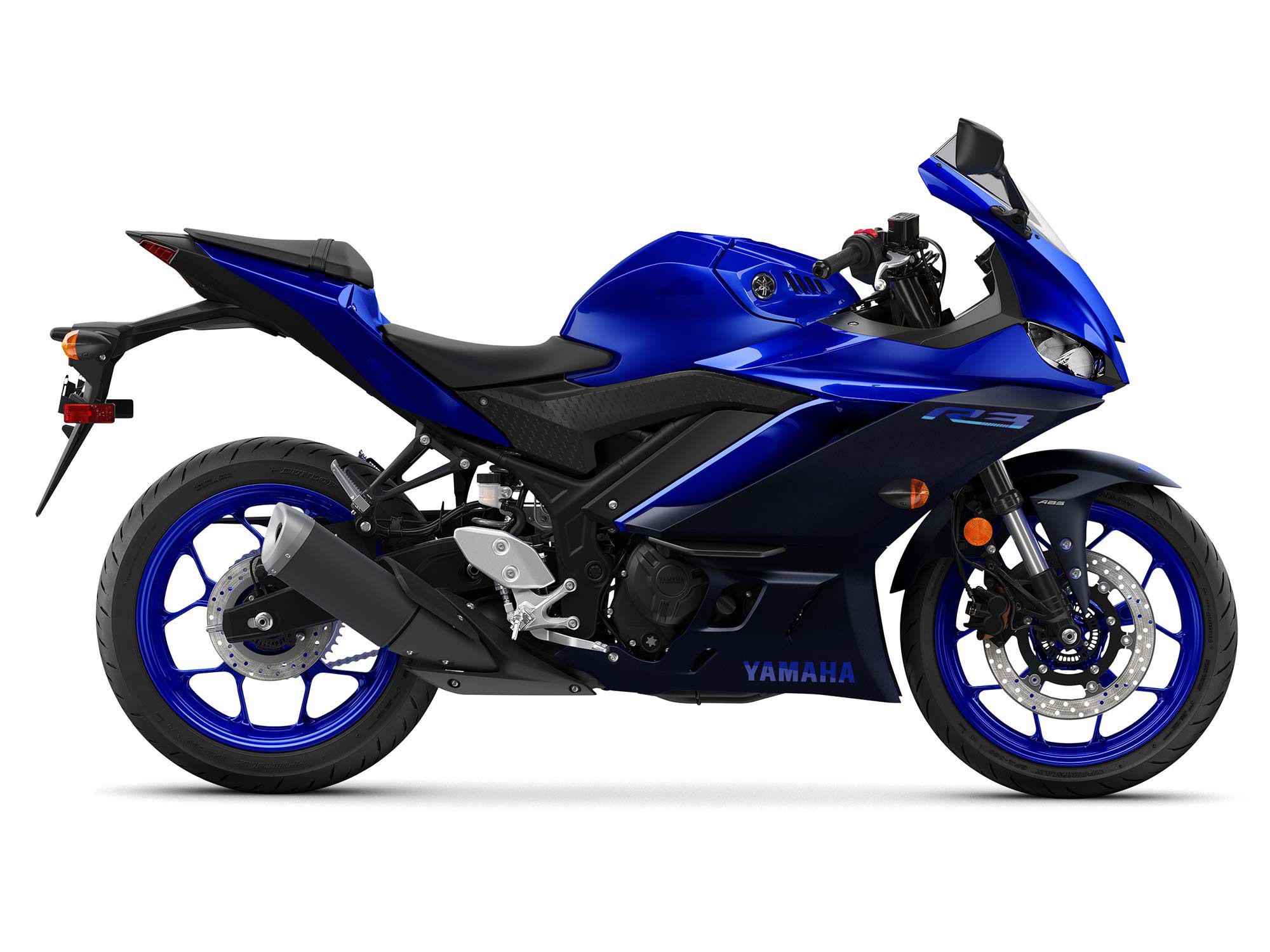 The YZF-R3 is Yamaha’s fully-faired entry-level sportbike and is inspired by its larger supersports. (Yamaha/)

321cc engine falls behind the larger-displacement competitionNo assist-and-slipper clutch, a feature common to both its competition and larger siblings

The popularity of the YZF-R platform is undeniable. As the entry into that lineup, the peppy, race-derived YZF-R3 is one of Yamaha’s top sellers thanks to sharp handling and beginner-friendly character. But is that enough when competitors’ engines grow to 400cc? A point to consider when shopping for a small-displacement sportbike.

Yamaha began competing in the Road Racing World Championship Grand Prix in 1961, and has been learning technological and cultural lessons that inform its motorcycle development ever since. That research, and its results, is carried on today by the tuning fork’s supersport lineup, from the YZF-R1M to the YZF-R3. To commemorate the dawn of its racing heritage, Yamaha decked out its YZF-R series in World GP 60th Anniversary livery for the 2022 model year.

From its slippery bodywork to details like YZR-M1-inspired top clamp and forged aluminum piston technology pulled from the YZF-R1, Yamaha’s littlest supersport is clearly just as serious about its purpose as the more powerful Rs. While the R3 shares these similarities, its tractable 321cc engine makes it attractive to riders who may feel intimidated by the larger iterations. The R3′s refined chassis and communicative brakes make it especially responsive both on the track and on winding roads. 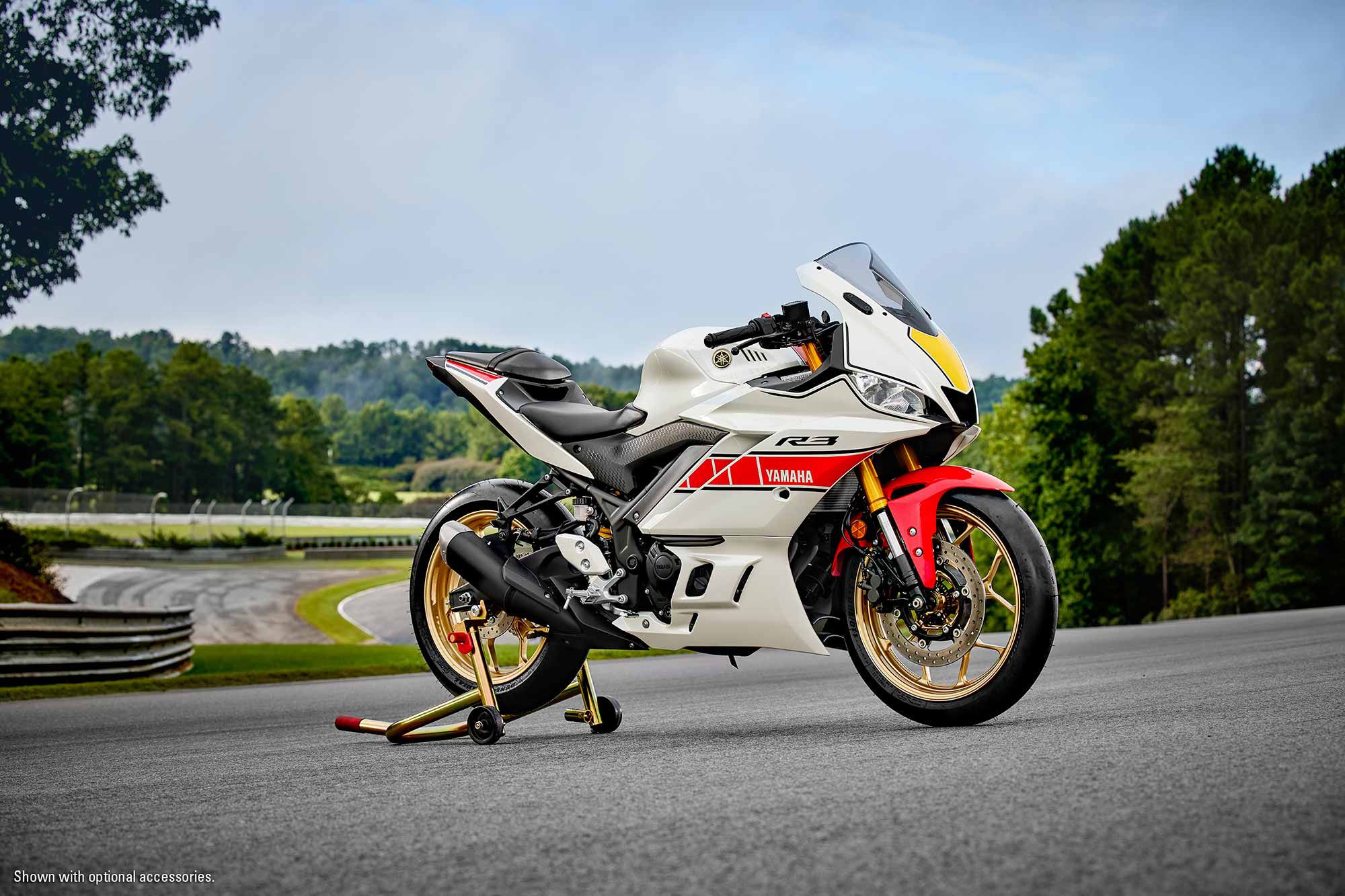 Bodywork graphics have changed for this year, but only slightly, not counting the addition of the World GP Anniversary Edition.

Midnight Black and Team Yamaha Blue return as the two primary color options for the base model, which rings in at $5,299. The YZF-R3 World GP 60th Anniversary Edition, at $5,499, looks particularly good in 60th anniversary Yamaha Heritage White and Rapid Red chain-block livery.

Competition is in its DNA, which is fortunate as this superbike-derived R3 has loads of tough rivals in the Kawasaki Ninja 400, KTM RC 390, Honda CBR300R, and Suzuki GSX250R. 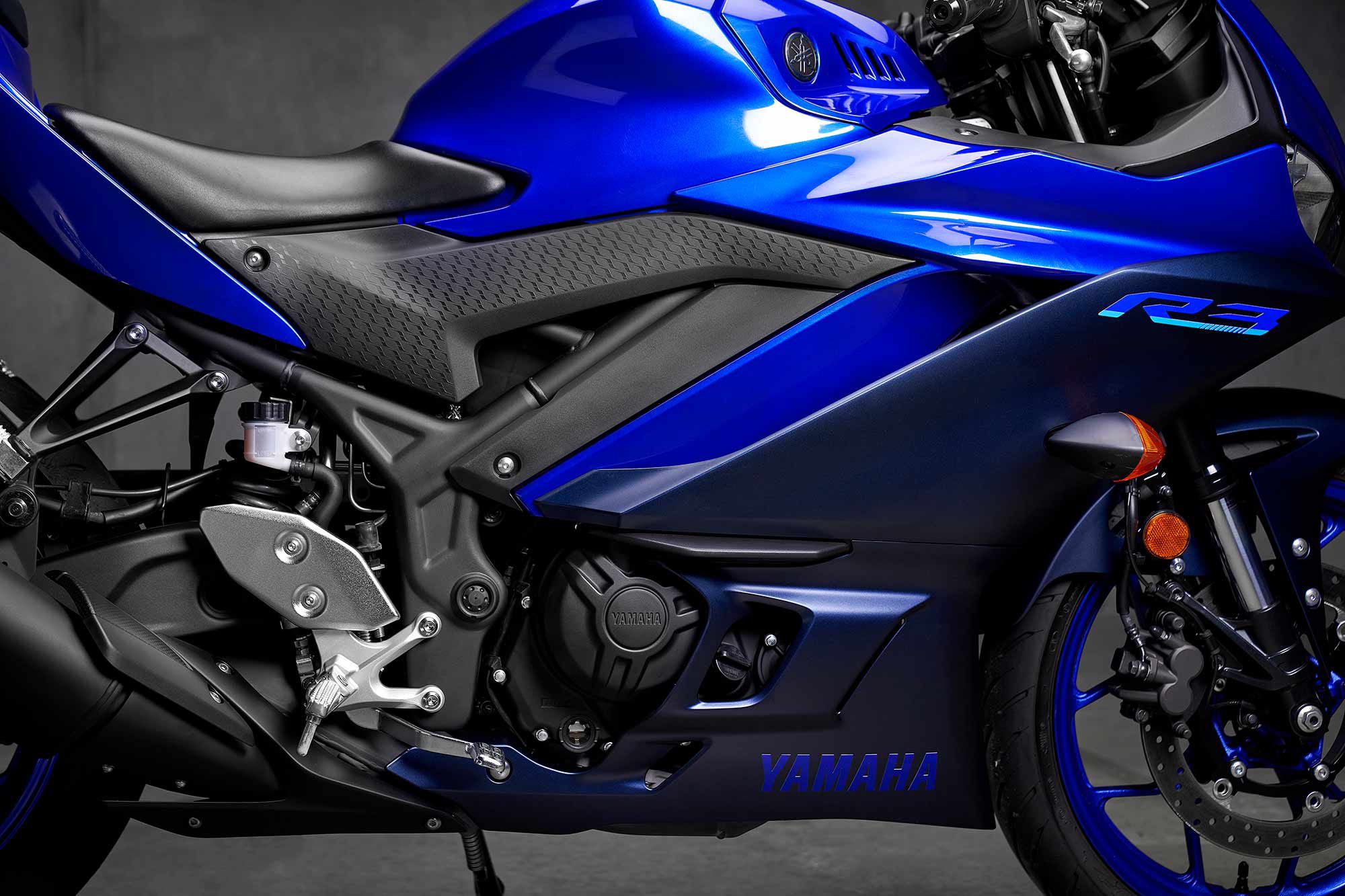 The R3′s 321cc parallel twin is mild mannered enough to provide riders with an education on managing a motorcycle’s power; the question, for some, is whether it’s enough to entertain riders as they grow, like Kawasaki’s Ninja 400. When we put these two head to head, we concluded that the R3′s lower displacement can indeed hold it back in the eyes of the competition-oriented. That said, the engine is engaging, and loves to be revved high in the 9,000 rpm range as seen by its run on the dyno, where it made 36 hp at 10,700 rpm and 19.8 pound-feet of torque at 9,000 rpm. In our earlier run of the R3, we applauded the bike for its impressive roll-on acceleration at speed and the aggressive sound from the 2-into-1 exhaust.

One odd omission remains an assist and slipper clutch, a feature seen on the YZF-R7 and many of the R3′s rivals. This can hinder the bike from reaching its true potential, because it requires smooth clutch actuation from its rider to keep the chassis stable.

In the same comparison as mentioned before, Cycle World found that the R3 really shines in its chassis and brake feel: “Refine your downshift technique and the Yamaha will reward you with a confidence-inspiring

Did you miss our previous article…
https://www.mansbrand.com/triumph-motorcycles-aims-for-kids-market-2022/