The example is equipped with the MonoCage III carbon-fiber monocoque platform and has a dry weight of 2,619 lbs., which is 22 lbs. lighter compared to the road-going Senna. Compared to the same, the Senna GTR has 3-inch wider front track and 2.7-inch wider rear track. It also has active aerodynamics, rear spoiler with a drag reduction system, as well as a revised front splitter and rear diffuser. The GTR can produce 2,205 lbs of downforce at 155 mph, which is 442 lbs more than the road-going version. 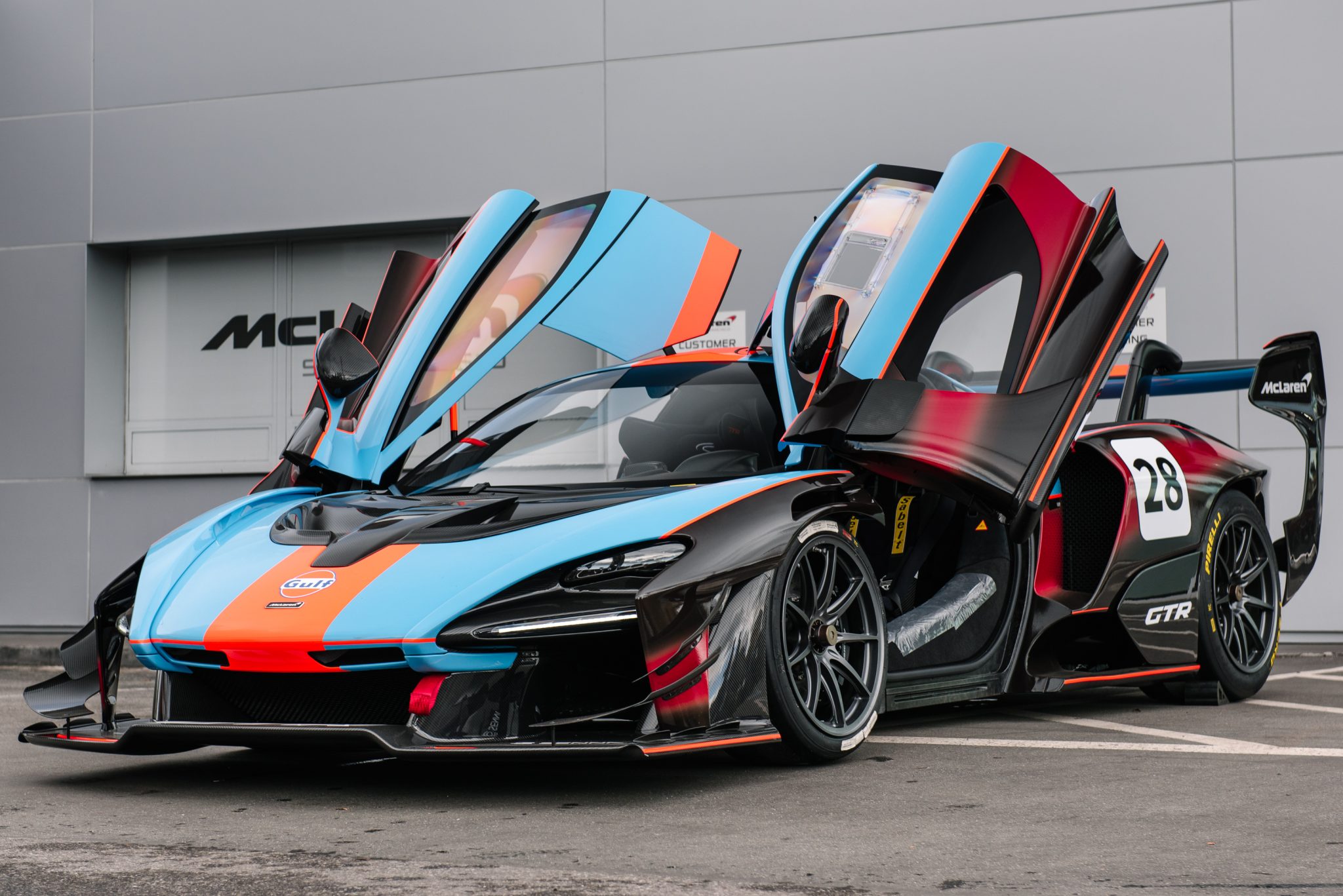 The example was given a $23,525 McLaren Special Operations finish with the body panels given a factory-installed MSO Gulf livery vinyl wrap that took inspiration from the McLaren F1 GTR that competed in the 24 Hours of Le Mans back in 1997, this was another $40k option. Features on the example include a roof scoop, polycarbonate windshield and windows, front and side air intakes, anti-collision system with rearview cameras and radar. It is also equipped with pneumatic air jacks.

The example has a newly installed 286/650 front and 325/705 rear Pirelli P Zero tires which were put in place just this May 2021. It is matched with the 19-inch center-lock wheels with a matte dark graphite finish. The sale will come with a set of orange 19-inch staggered-width center-lock wheels.

The suspension of the Senna GTR is similar to the one used on the 720S GT3 race car with double-wishbones at all four corners and four-way adjustable Ohlins dampers, and adjustable anti-roll bars. It is also equipped with stability control, traction control, and anti-lock brake systems which it shares with the road-worthy Senna. For the braking system, it has a revised brake booster, and six- and four-piston aluminum monobloc calipers on carbon-ceramic rotors. 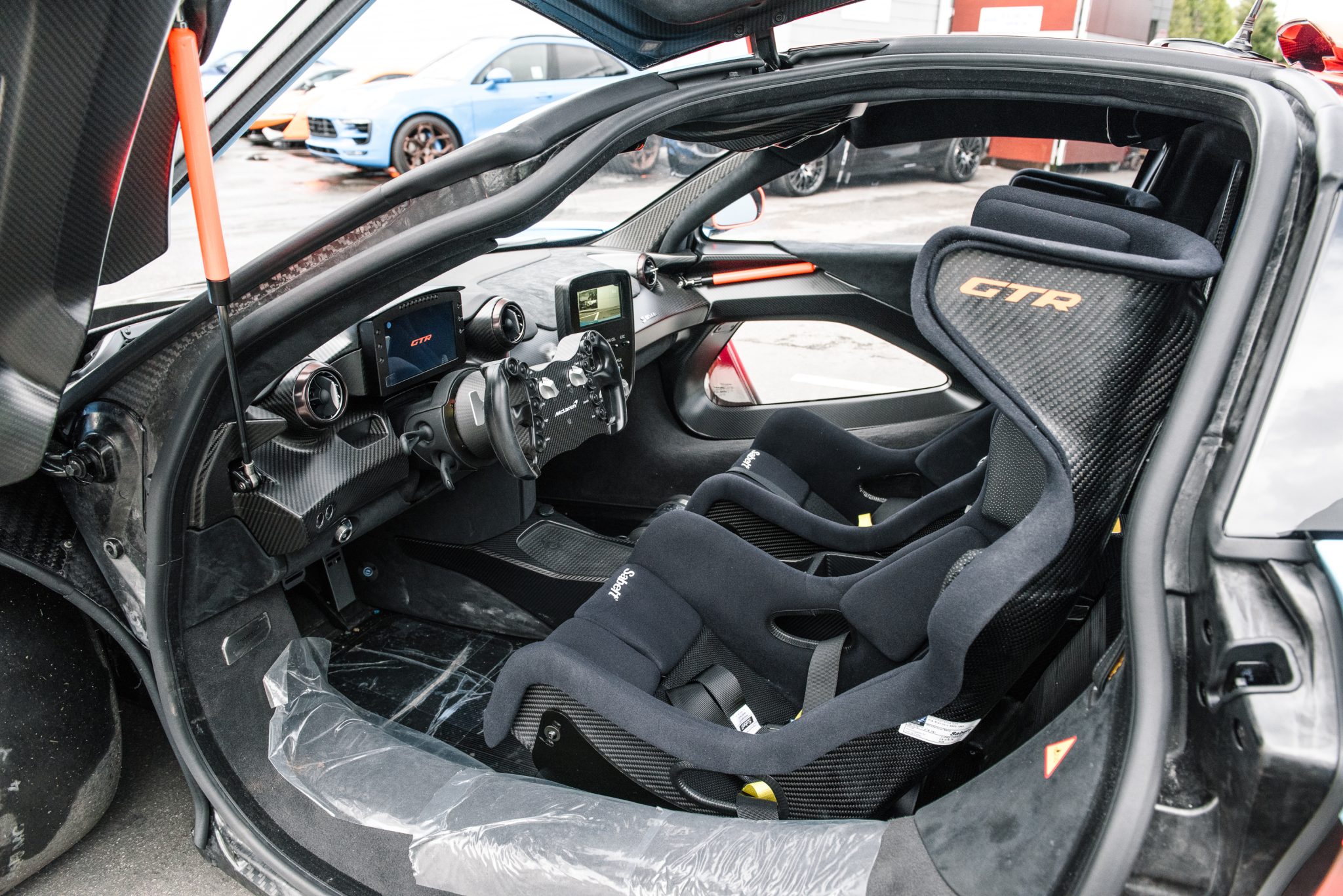 When the twin-hinge dihedral doors are opened, the carbon-fiber racing seats trimmed in black Alcantara marked with the GTR brand are revealed. This Senna GTR has a passenger seat, with both seats are equipped with six-point harnesses. There is also the integrated roll cage, fire-suppression system, pit-to-car radio, and air conditioning.

The multi-function steering yoke with paddle shifters sits in front of an LCD data-logger with integrated shift lights. The example has a mileage of only 600 kilometers (around 400 miles).

The driver’s door sill has a plaque that shows the car as #28 of 75 examples made.

Under the hood is a twin-turbocharged 4.0-liter V8 engine which is similar to the road-worthy Senna. It is factory rated at 814 hp at 7,250 rpm with 590 lb-ft of torque at 5,500 rpm in GTR specification. A seven-speed dual-clutch automatic transaxle delivers power to the rear wheels of the example.

The Carfax reports the maintenance service done on the example from January 2020 to December 2021. It shows neither any accidents nor any damage.

Did you miss our previous article…
https://www.mansbrand.com/a-conversation-with-jeff-oneill-ryan-turri-of-velocity-invitational/

A Conversation with Jeff O’Neill & Ryan Turri of Velocity Invitational