Descendants of Pebble Beach Drivers Take on the Track this August

This year marks the 70th anniversary of the Pebble Beach Road Races and Pebble Beach Concours d’Elegance. To celebrate the milestone, Del Monte Trophy Race Group proudly announced a unique new event for this year. Five of the early 1950s Special in the Del Monte Trophy Race Group 4A will be making an appearance at the 2021 Rolex Monterey Motorsports Reunion. The cars will be raced by present-day race drivers who are all directly related to the car’s original driver.

Ted Cannon built the Cannon Mk1 Special in his North Hollywood, CA machine shop. Local fireman Jim Seeley drove the car when it was entered by the Cannon and Seeley families. 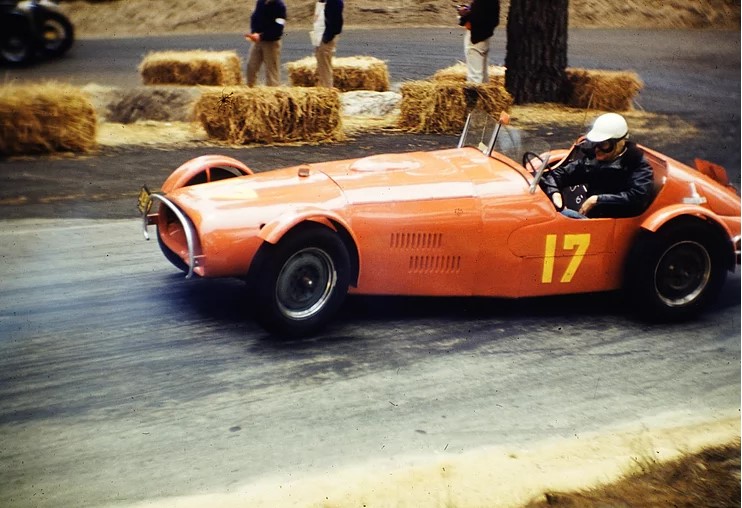 Rick is Ted Cannon’s nephew. Jim’s son, Dave Seeley, will be assisting. The chassis and front suspension of the Cannon Mk1 Special came from a 1934 Dodge sedan owned by Ted’s grandfather. It had a full house Mercury V8 built with the assistance of the Throttler’s Hot Rod Club. The current car was given an Ardun overhead valve conversion. It is also equipped with a Ford 3-speed transmission with a Zephyr gear set. They bought a wrecked Lincoln Zephyr for the gears and its major body panels were repurposed for the Cannon Mk1 Special. In the inaugural 1950 Pebble Beach Cup, the car finished 3rd and was subsequently raced in the next two races, the Pebble Beach Road Races 1951 and 1952.

John Streets is a builder, racer, and a renowned Formula Vee and Formula Ford racer and Regional Champion. John is the only National Formula Vee Champion that hails from the West Coast. Skip Streets is his son.

Chuck Manning was a former Douglas Aircraft Stress Engineer. The Manning Special was designed and built as a technical exercise for Road and Track magazine, and for only $2, subscribers can acquire the plan set. In the 1950s, they were able to make three Manning Specials which they raced, and in which the Streets Manning Special is one.

The car was built through the teamwork between Manning and Wally Chapman, as they worked on it in Schaghticoke, New York, in an upstairs back bedroom of his grandmother’s house. At the time, John Streets was a young engineering student that hailed from England, and he helped to finish the car. Streets also raced it in Eastern Canada and New York.

One of the main important features of the Special is the ultra-lightweight, rigid, tubular chassis made by Manning. The car was powered by a classic Mercury Flathead V8 matched with a pre-War Ford suspension and drum brakes. The other two identical Manning Specials were entered into the Pebble Beach Road Races in 1952, 1953, and 1954.

Charles (Chuck) Tatum built the Special in Stockton, CA. Chuck Tatum was a Marine Corps veteran who was at the assault on Iwo Jima. In his return home to Stockton, CA, he became interested in auto racing. At the Stockton Road Races, during a dinner with Phil Hill, Doug Trotter, and Sammy Weiss, he was dared to build a racing sports car that would be capable of beating the importer Jaguars and Aston Martin that the others were driving. The dare resulted into the creation of the Tatum GMC Special. Chuck used a Ford truck running gear and designed and built the tubular chassis himself. For the engine, he used a Stockton Fire Department truck’s OHV in-line 6-cylinder engine. In 1954 and 1955, it was eventually replaced by full race versions that were supplied by the go-to manufacturers of GMC speed equipment, Wayne Engineering. Jack Hagemann from San Leandro did the all-aluminum body.

The car became quite famous in its time and was even featured on the cover of Hot Rod Magazine’s November issue. At the Oakland National Roadster Show, it won the Best Sports Car Trophy, and was able to do 147mph at Bonneville. In 1954, it was in a major Hollywood bomb Johnny Dark which starred Tony Curtis and Piper Laurie. From 1953 to 1955, it won the Stockton and the Madera Road Races, and it was also a strong contender in the West Coast races. It was part of the 1954 Pebble Beach Road Races.

Chuck’s son, Blake Tatum, is a renowned racer and a Northern California Region of the SCCA Board Member and major supporter. Blake is also a multiple Regional Formula Vee Champion and has even used cars that his

Nissan e.dams Geared Up for Formula E Finale in Berlin