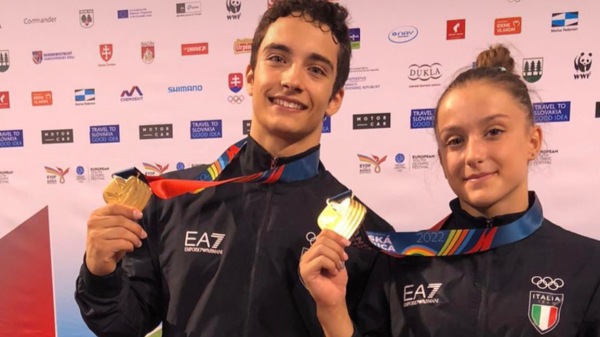 In lieu of holding the all-around competition on a separate day from the combined team final and individual qualification at the European Youth Olympic Festival, the organizers decided to make the all-around race part of that first day, and instead included a separate mixed pairs final.

The mixed pairs competition brought WAG and MAG athletes together, combining their scores on three events apiece in a preliminary round, with the top four pairs moving on to semi-finals and finals. A total of 16 teams qualified from the first day of competition, where the WAG athlete with the top combined score from vault, beam, and floor and the MAG athlete with the top combined score from floor, parallel bars, and high bar had their scores added together to create the mixed pairs ranking.

These 16 mixed teams to make it in included, in qualification order:

Viallat unfortunately had to withdraw due to a nagging injury, and was replaced by teammate Lana Pondart, but she was the only qualifier to skip this event, and we got to see a ton of excellent gymnastics in today’s competition.

The athletes could choose the apparatuses they wanted to compete in the first round (again, with WAG having the option of vault, beam, and floor while MAG had the option of floor, parallel bars, and high bar), and it was pretty telling that all of the teams that qualified did not include ladies who did beam!

Fifth-place Great Britain, just a few tenths away from making the final with a 50.665, saw Martin choose to do beam, where she earned a 12.0 along with a 12.966 on vault. It was a risk, but it was also a risk to save beam for the semi-final, which caused a little bit of drama.

The semi-final round, where scores started over from scratch, put first-place Italy in direct competition with fourth-place Ukraine, and second-place Germany against third-place Romania. In that second battle, Puflea started out with two falls in her routine, on her mount and flight series, and though Puicea hit floor, the pair ended up not able to challenge Germany. Kevric had a bit of a nervous routine on beam, but ultimately hit, while Nissinen also hit floor, putting them pretty easily into the gold final, while Romania would go to the bronze final.

The Italy vs. Ukraine match actually ended up closer than expected. Villa had a great p-bars set, though Grillo fell on a back roll to handstand, a pretty surprising fall in an otherwise good routine. But Ukraine would also count a fall from Stelmakh, who missed his layout Tkachev on the first attempt, and then Lashchevska was also a bit off on her front acro series, touching the beam, putting Ukraine in the bronze final with Romania, while Italy made the gold final with Germany.

Scores again started from scratch in the final rounds. Lashchevska was daring enough to choose beam again after just having competed it in the semi, but I’m glad she did – she was exquisite, hitting every skill so well, and despite a couple of missed connections, it was super solid and clean, earning a 12.8. Stelmakh, meanwhile, opted to go with floor, and it paid off, with excellent landings across all of his passes, earning a 13.6 to help Ukraine reach a 26.400 total.

For Romania, Puflea decided to go with vault. Athletes who went with vault in the semi or the final had to compete two, with the average score counting, and though Puflea warmed up a couple of short Yurchenko doubles, she ultimately went with a full and a layout, earning a 12.816 average. That combined with Puicea’s 13.033 on floor equalled a 25.849, which wasn’t quite enough to chase the Ukrainians, who were thrilled to find out they’d won the bronze.

Kevric also decided to vault in the gold final, opting to stick with a Yurchenko full instead of a double for her first, and then a layout for her second, but both were very clean and solid, and she averaged a 13.0. Nissinen had a hit routine on high bar, which was one of the riskiest choices out there along with Lashchevska’s beam, but it also paid off for him, with his set getting a 13.033, giving Germany a 26.033 total.

The Italians went last, and though Grillo – who competed the same vaults as Kevric – scored a tiny margin below the German with a 12.983, Villa more than made up for it with an excellent floor routine, earning a 13.366 to bring Italy to a 26.349, a solid three tenths ahead to take the gold, while Germany won the silver.

I love the bracketing that goes into these meets, and wish there was more time so that we could have seen eight in the semifinal and then four in the two finals, but it’s also a little sad when a team in the lower final bracket outperforms both teams in the top bracket, which is what happened here. Though Ukraine won bronze, their 26.400 combo beat Italy’s 26.349 and Germany’s 26.033, highlighting what an incredible final couple of routines we saw from Lashchevska and Stelmakh.

Regardless of how the final scores and the podium worked out, everyone seemed thrilled to get these “bonus” medals that haven’t yet been awarded at EYOF, or really at any similarly large continental or world competition in recent years, and it added a layer of fun to what can often be such a serious and stressful situation, especially for young and inexperienced juniors.

Before we go, I wanted to shoutout a few of the performances from the preliminary round that I haven’t yet talked about. Lucia Dobrocka, the darling of Slovakia, hit another great vault and solid beam set here to help her pairs team finish in seventh place after winning a tie-break against France, which was eighth. I also got to see Nazanin Teymurova on floor again, and after counting a fall yesterday, it was great to see her get a hit here, earning a 12.033 there on top of a 13.133 on vault to help Azerbaijan to 10th, a very impressive finish! I also saw a superb stuck vault from Sainza Garcia of Spain, which finished 11th.

Read More
Did you miss our previous article…
https://www.mansbrand.com/nominees-announced-for-the-43rd-annual-news-documentary-emmy-awards/

Will Smith hits Chris Rock at the 2022 Oscars. In the video, he talks about “deep remorse” and “apologizes”