After deleting all his previous posts late last night — including a photo with Davidson where he had drawn a red ‘X’ over Davidson’s face, his demand that Billie Eilish apologise to Travis Scott, and an announcement that he will no longer be friends with Kid Cudi due to Cudi’s friendship with Davidson — the rapper, now legally known as Ye, shared a series of rants against Davidson, one of which included a paparazzi photo of Davidson and Kardashian taken last month where West called Davidson a “d–khead” in the caption.

Of West’s widely-reported posts he previously shared prior to the early hours of this morning, the only one that remained was a call to God to reunite his family with Kardashian. 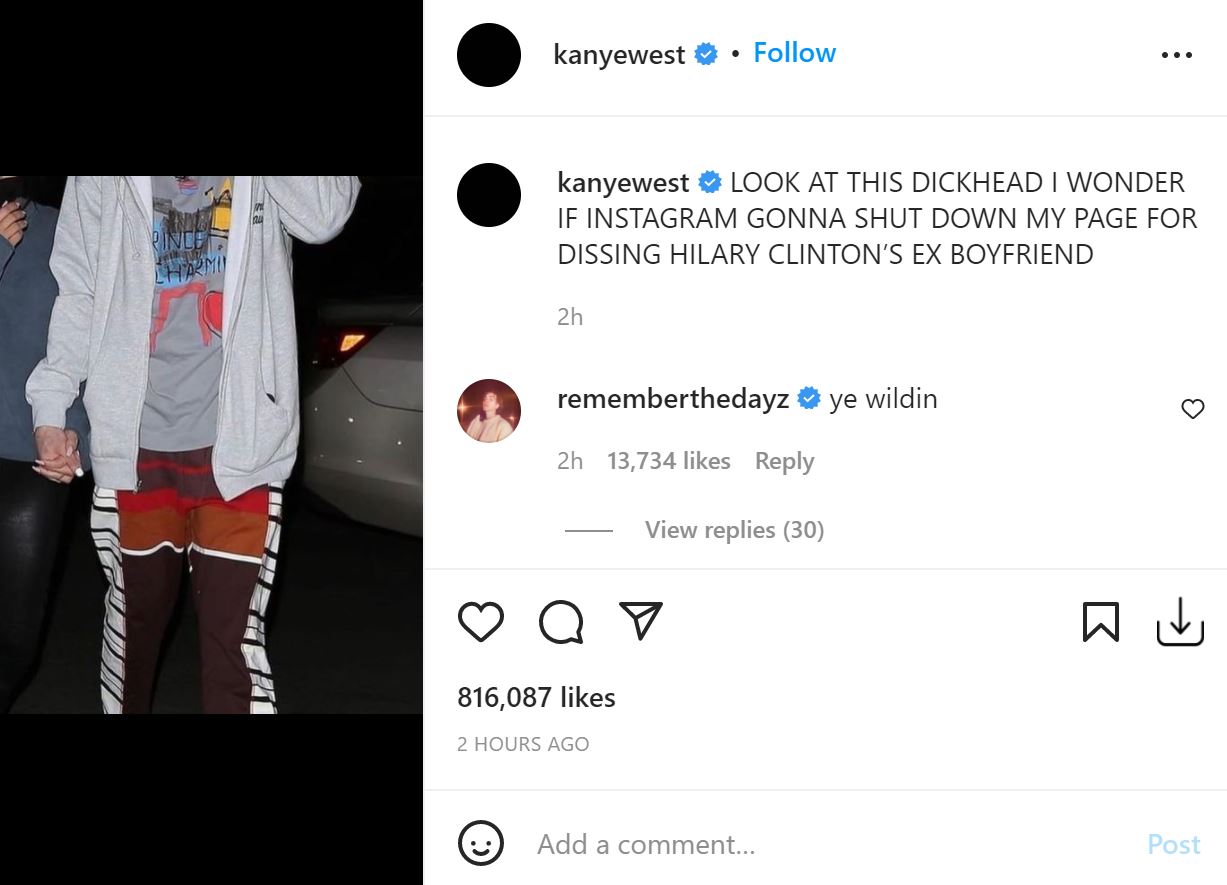 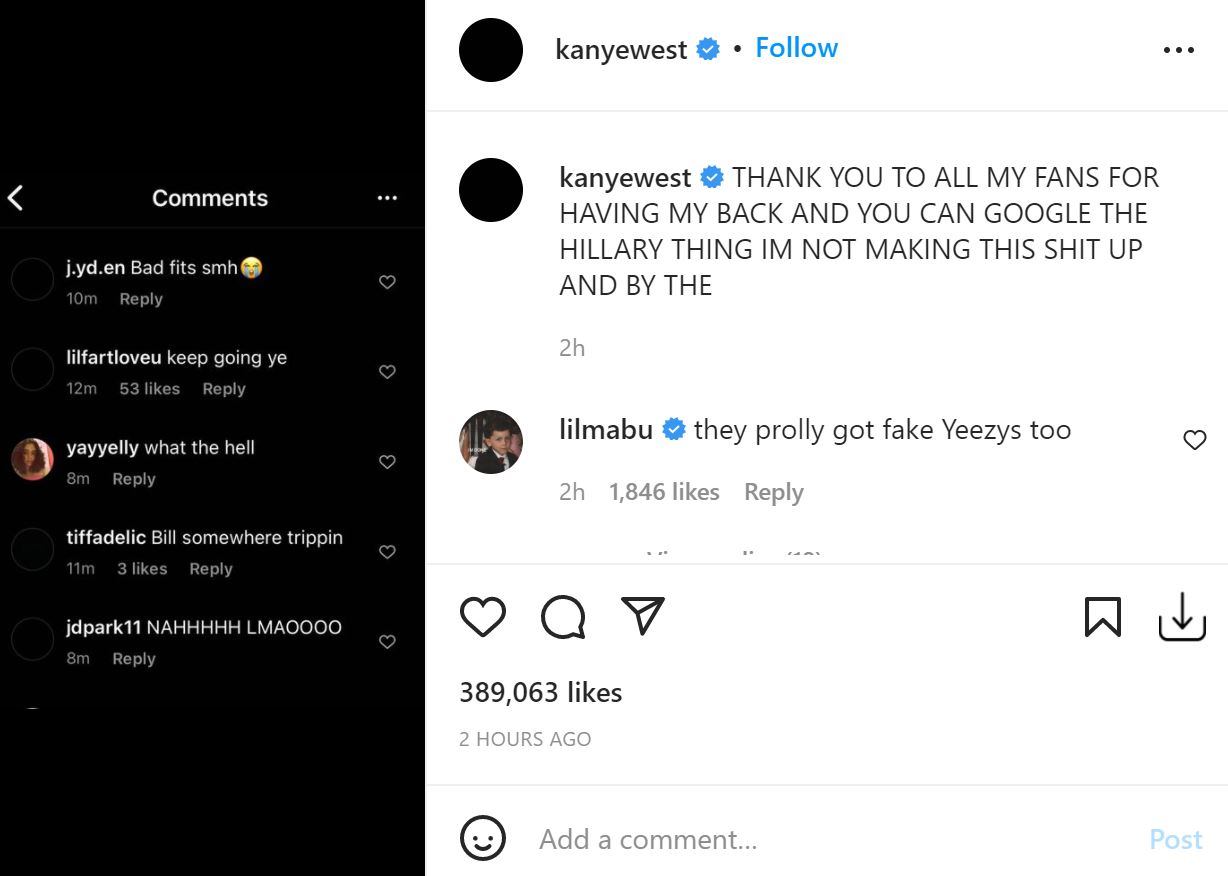 “LOOK AT THIS D–KHEAD,” West, 44, captioned a cropped shot of Davidson and Kardashian holding hands.

“I WONDER IF INSTAGRAM GONNA SHUT DOWN MY PAGE FOR DISSING HILARY CLINTON’S [sic] EX BOYFRIEND.”

West then shared a screenshot of the comments on the aforementioned post — one of which urged “keep going Ye” — writing, “THANK YOU TO ALL MY FANS FOR HAVING MY BACK AND YOU CAN GOOGLE THE HILLARY THING IM NOT MAKING THIS SHIT UP AND BY THE”

West was referring to Davidson’s tattoo of Hillary Clinton, which he kindly informed his followers of when he shared a photo of said tattoo, writing, “WHEN I TAG PEOPLE IM JUST PUTTING TOGETHER THE WEB THERE ARE A GROUP OF PEOPLE WHO RUN MEDIA AND THE ELECTION THANK GOD FOR FREE SPEECH.” 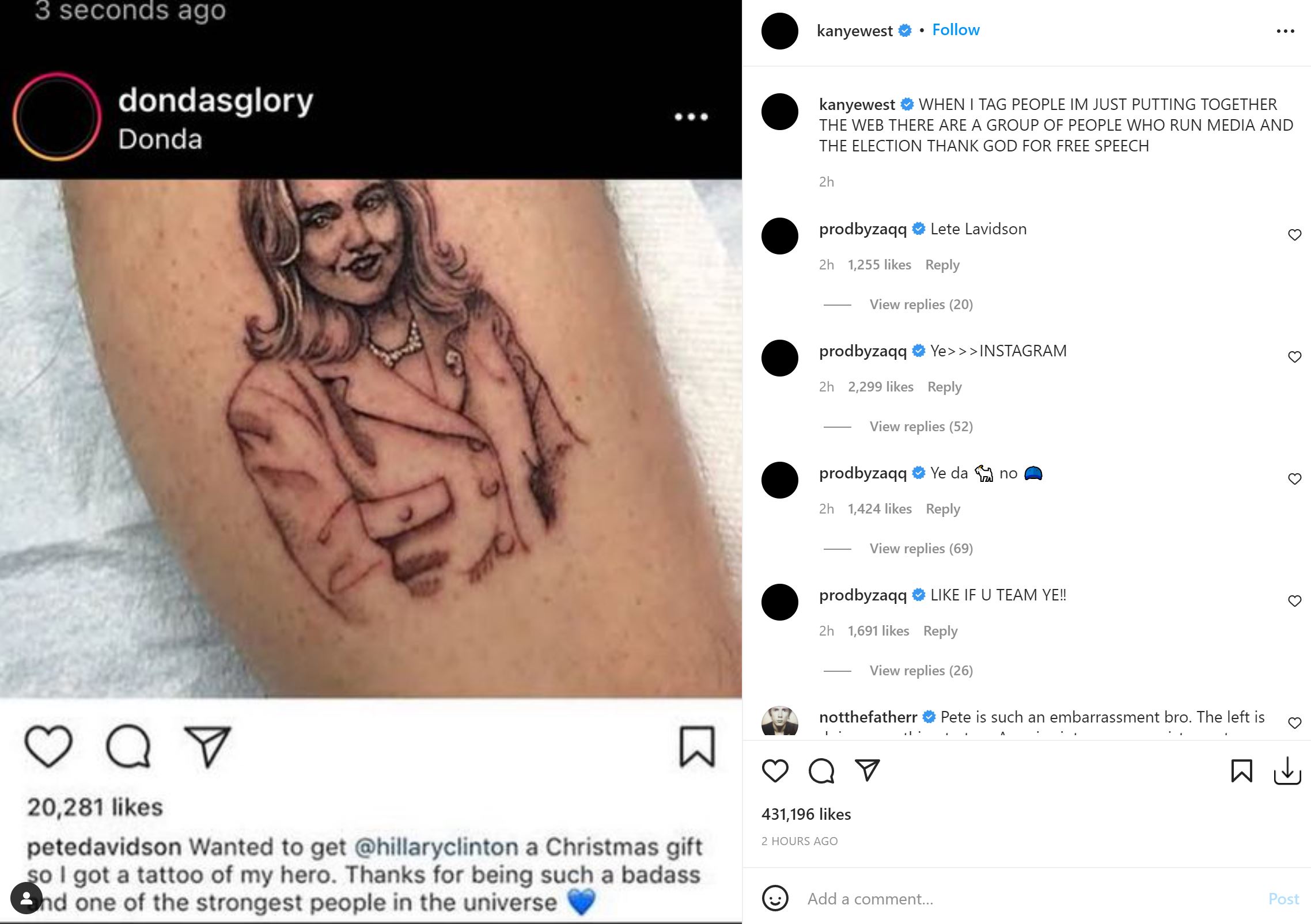 He then shared a screenshot of an image edited to show West and Davidson facing each other, for a “fight night.”

“THIS AINT ABOUT SKETE PEOPLE IT’S ABOUT SELLING YALL A NARRATIVE SKETE JUST PLAYING HIS PART IN FROZEN 3 ACCEPT ITS NOT IN THE THEATERS THIS TIME ITS ON DAILEY MAIL [sic],” West wrote.

“TELL BOB [Iger, former Disney CEO] AND THE ENTIRE DISNEY STAFF YOU WAISTED [sic] YOUR MONEY ON STARWARS AND MARVEL BECAUSE EVEN THOUGH IT MAKES MONEY YOU WILL NEVER CONTROL THE HIGHSCHOOLS NO ONES EVER HEARD A MACHINE GUN KELLY SONG BOB,” West said, tagging a Bob Iger fan account in the image. 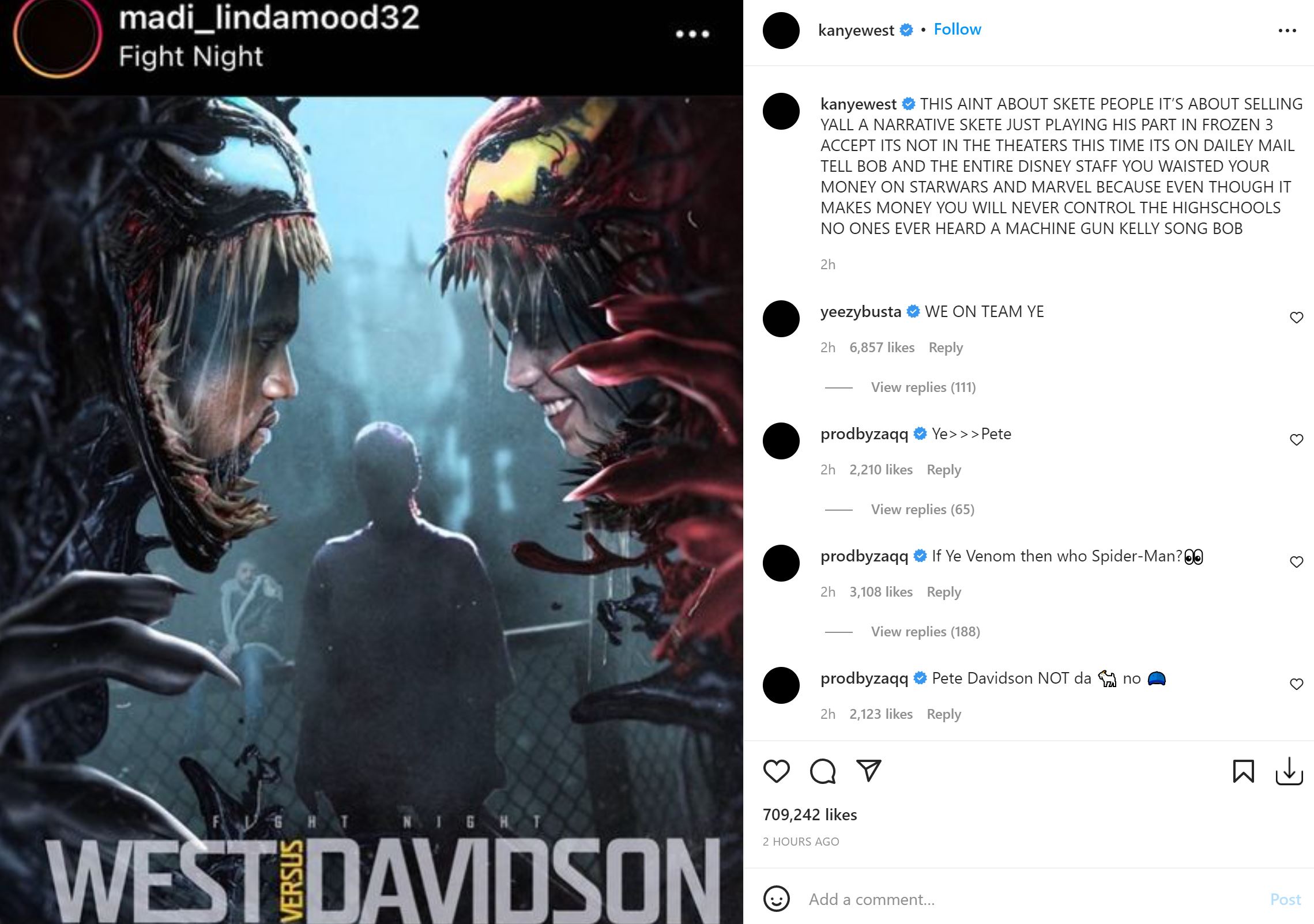 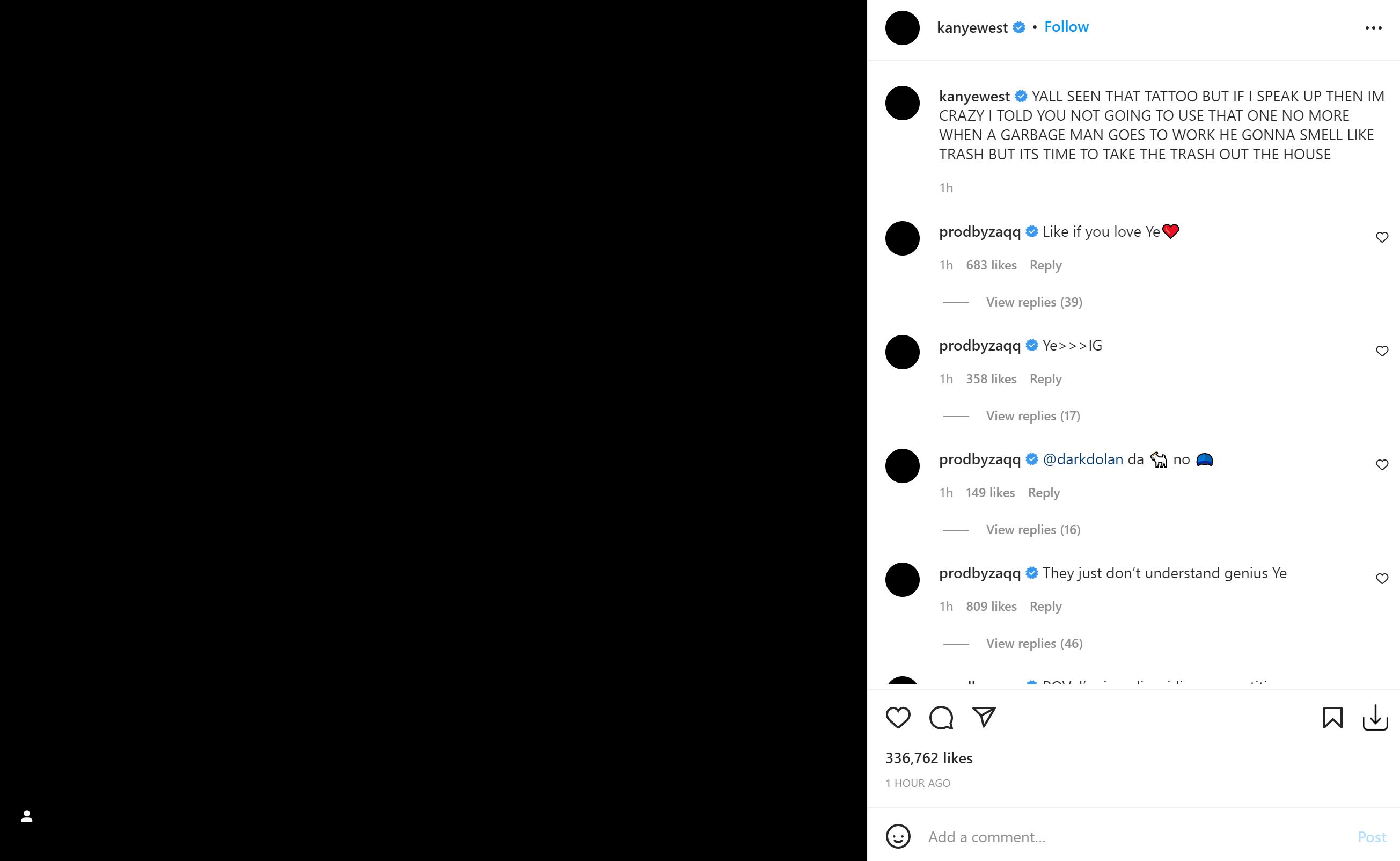 West then shared a blank black image, tagging American radio host and television personality Lenard Larry McKelvey, writing: “YALL SEEN THAT TATTOO BUT IF I SPEAK UP THEN IM CRAZY I TOLD YOU NOT GOING TO USE THAT ONE NO MORE WHEN A GARBAGE MAN GOES TO WORK HE GONNA SMELL LIKE TRASH BUT ITS TIME TO TAKE THE TRASH OUT THE HOUSE.”

West’s spree continued with an image of Davidson with Machine Gun Kelly, who is close friends with Kourtney Kardashian and her fiancé Travis Barker, and a text from Davidson, writing alongside it, “NO YOU WILL NEVER MEET MY CHILDREN”.

In the message, which is partially obscured, Davidson allegedly wrote, “As a man I’d never get… way of your children… a promise… How you guys… about raising your kids is your… and not mine… I do hope… day I can meet them and we… all be friends.” 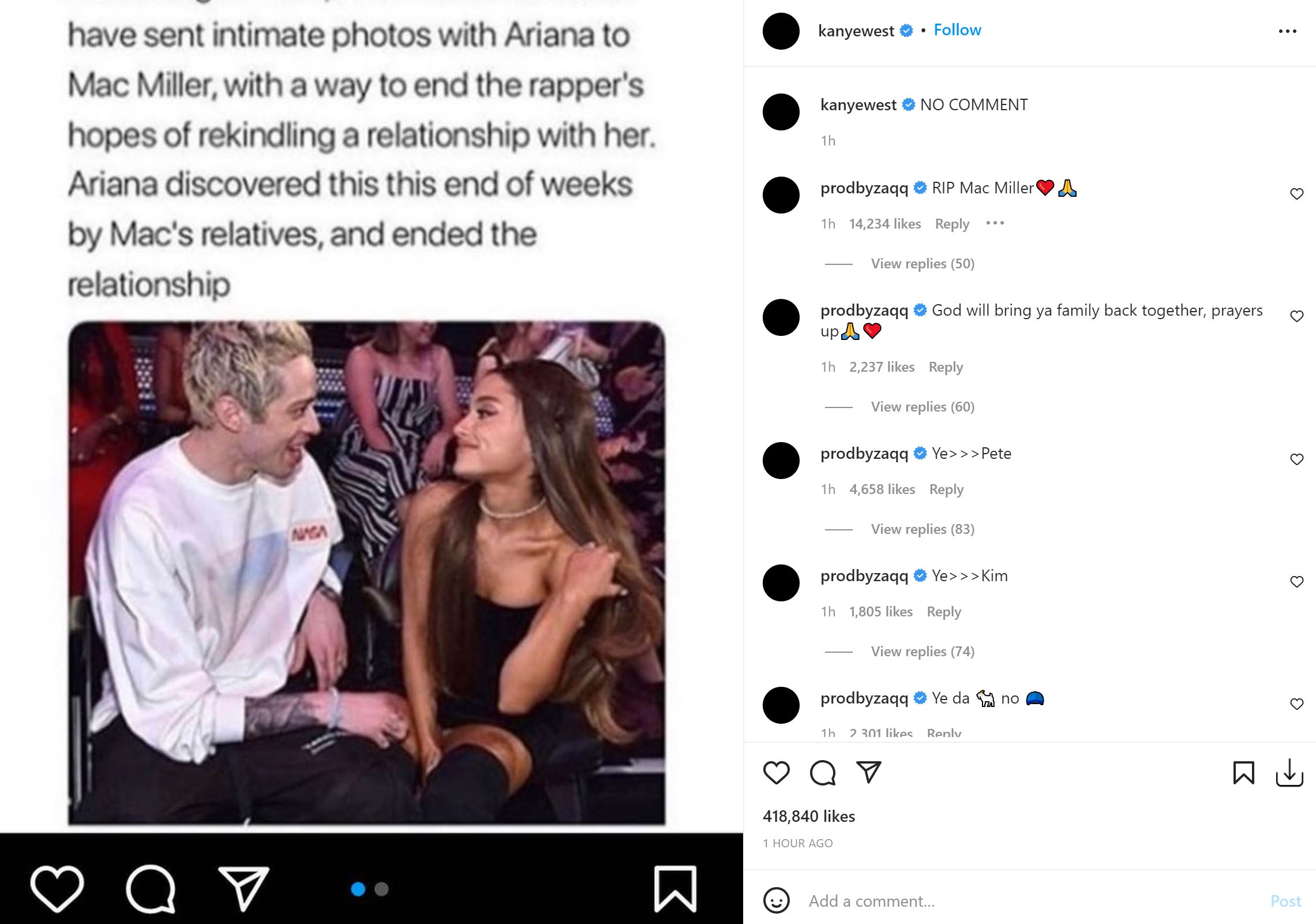 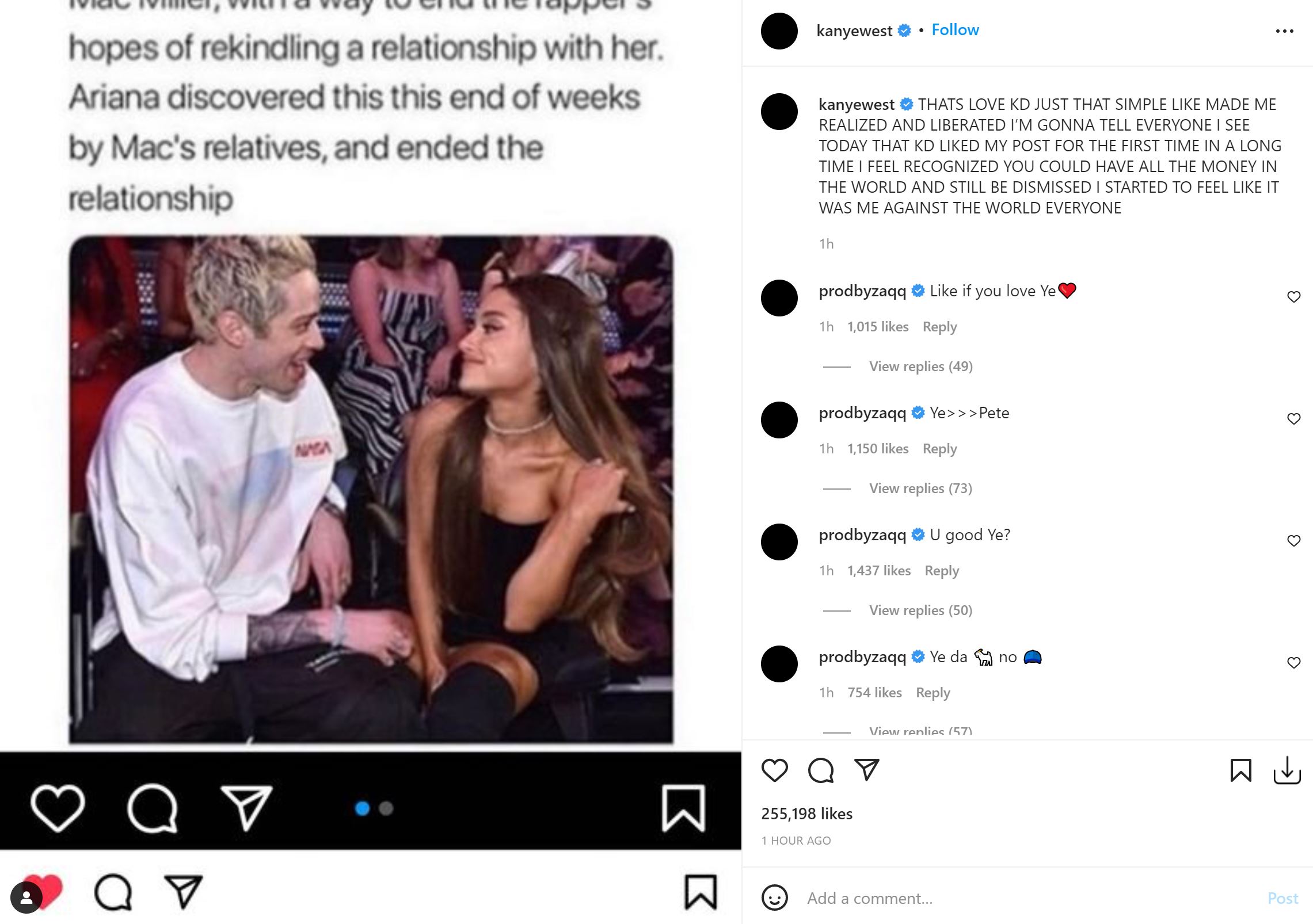 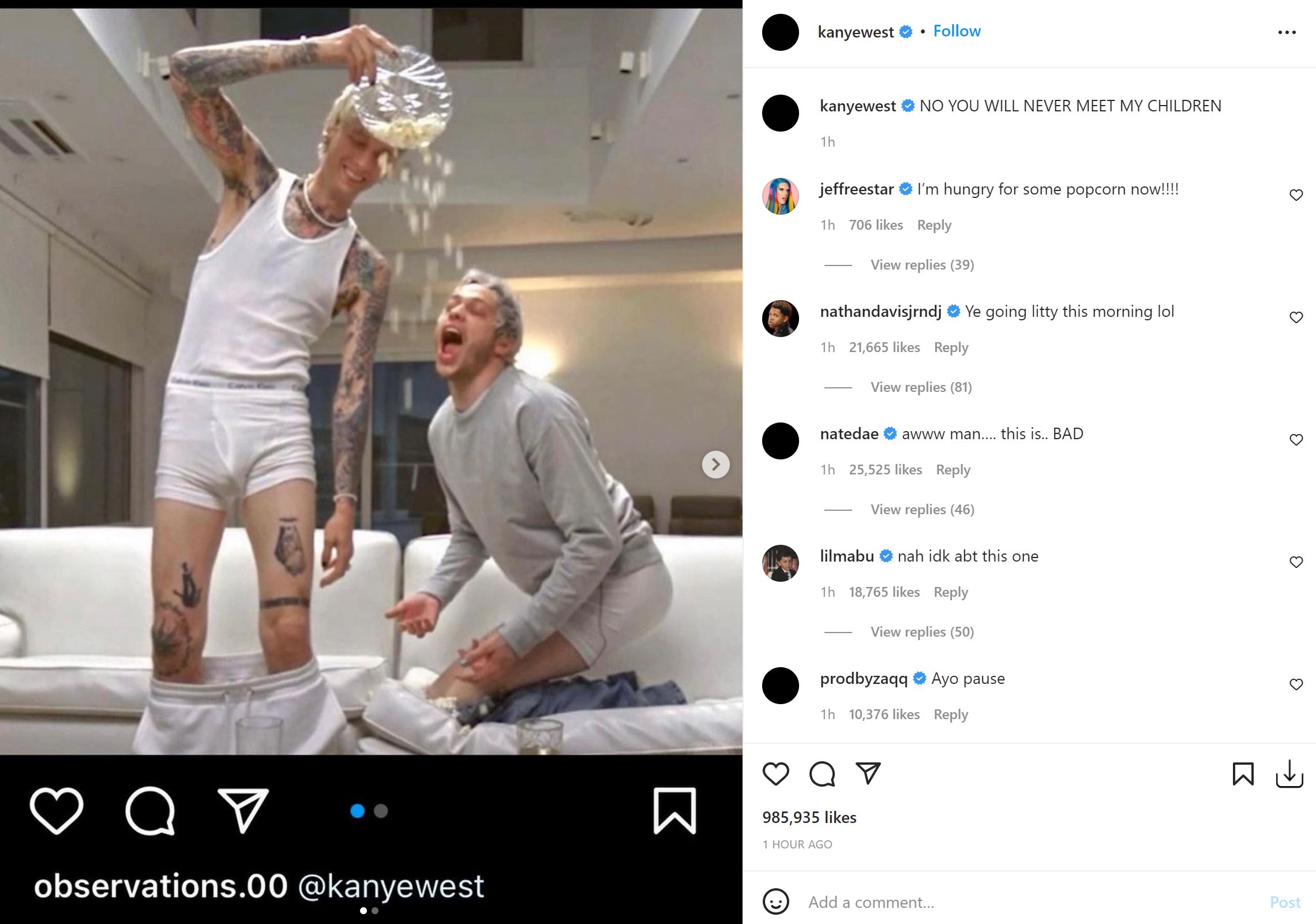 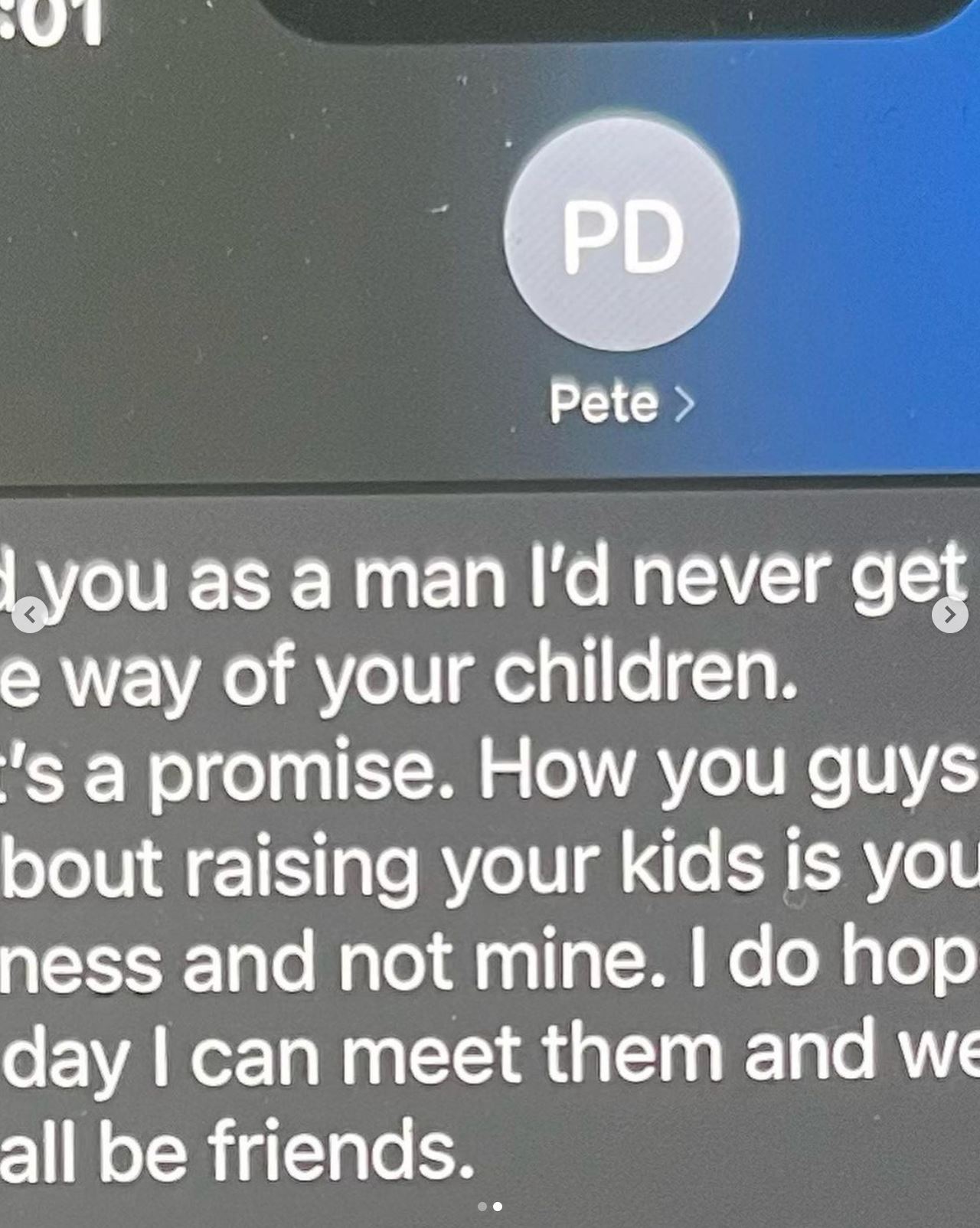 In some images, West is wearing a black hood over his head, covering his face.

“MY ACCOUNT IS NOT HACKED I WILL BE AT SUNDAY SERVICE AT NOON AND WILL ME TAKING NORTH AND SAINT TO THE SUPERBOWL SHORTLY AFTER,” he wrote.

“[McKelvey] I’LL DOUBLE WHATEVER THEY PAYING YOU JUST SO YOU DONT HAVE TO LOOK AT THAT PAWN EVER AGAIN BIG LOVE”. 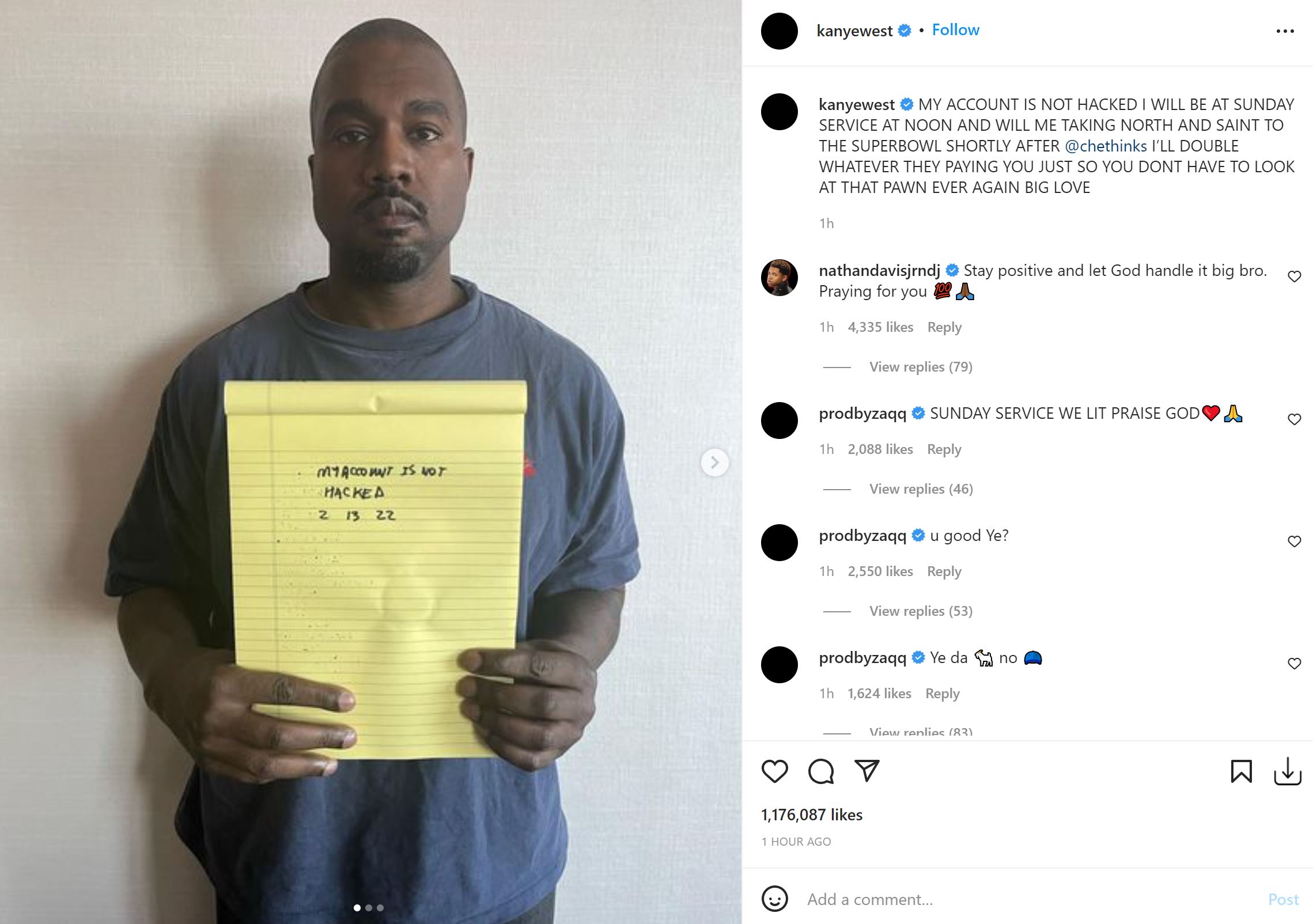 West then re-shared the same image of Davidson and Grande, writing, “THATS [sic] LOVE KD JUST THAT SIMPLE LIKE MADE ME REALIZED AND LIBERATED I’M GONNA TELL EVERYONE I SEE TODAY THAT KD LIKED MY POST FOR THE FIRST TIME IN A LONG TIME I FEEL RECOGNIZED YOU COULD HAVE ALL THE MONEY IN THE WORLD AND STILL BE DISMISSED I STARTED TO FEEL LIKE IT WAS ME AGAINST THE WORLD EVERYONE”.

He also thanked The Shade Room for re-sharing one of his posts: “THANKS SHADE ROOM FOR ALWAYS SHOWING LOVE THANK YOU FOR HELPING ME TO CONTROL MY OWN NARRATIVE AND NOT WRITING ME OFF WHEN A TEAM WINS THE SUPER BOWL WE DON’T COMMENT ON HOW SWEATY THEY GOT OR HOW MUCH PAIN THEY SUFFERED IN THAT GAME ITS ABOUT TAKING HOME THAT TROPHY SO WHEN I GET ON MY GRAM IM NOT AFRAID TO GET SWEATY OR TAKE A HIT FOR MY FAMILY THIS IS NOT A RANT THIS IS CALLED FREEDOM OF SPEECH I AM A FORM OF MEDIA BEZOS BOUGHT THE WALL STREET JOURNAL AND WILL STILL NEVER HAVE THIS LEVEL OF INFLUENCE NO MATTER HOW MANY DINNERS HE DOES WITH MY WIFE AND SKETER AND PAGE SIX STOP USING BAD PHOTOS OF ME YALL THAT WHOLE OFFICE WOULD DIE TO GO ON A DATE”. 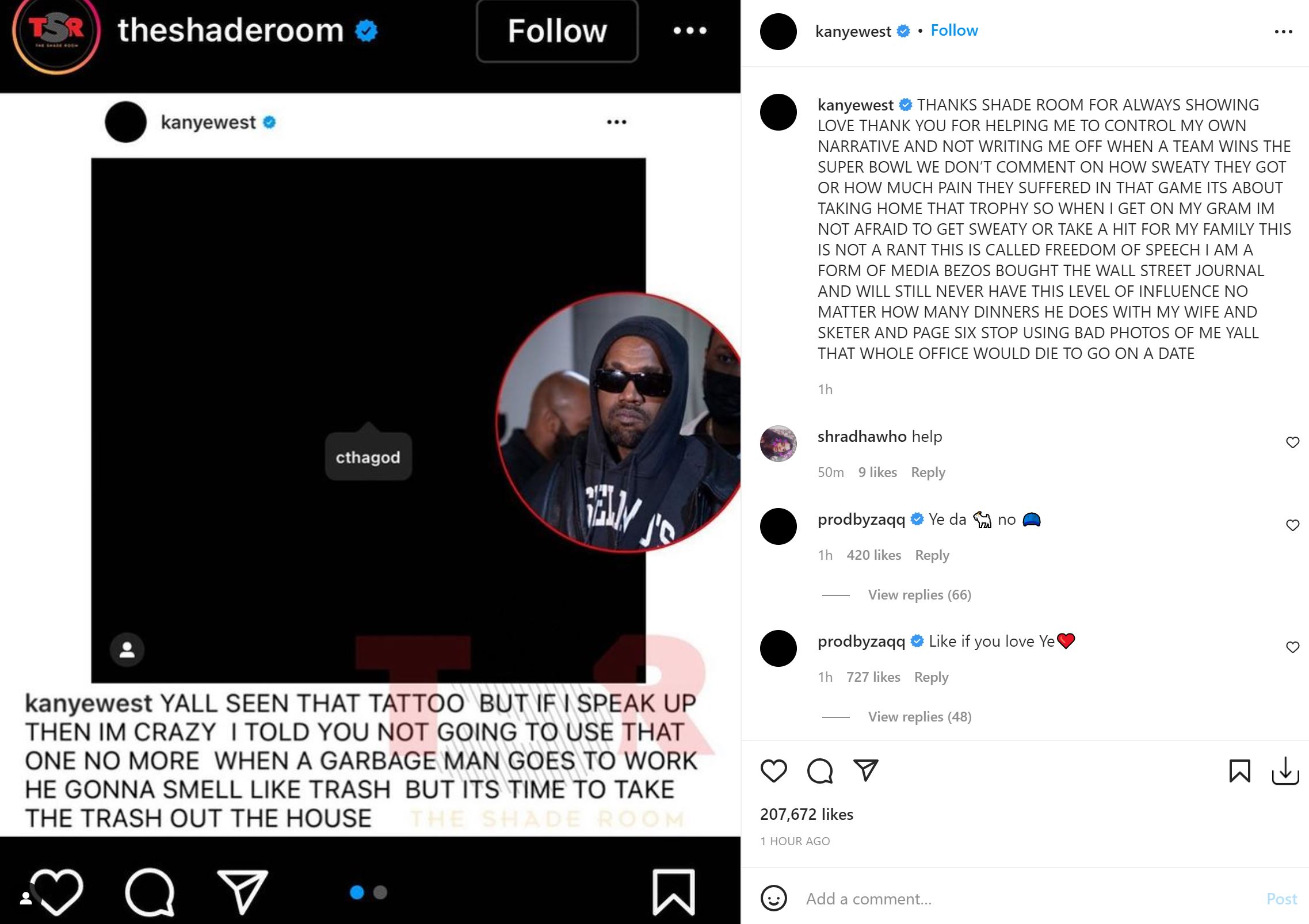 Of his friendship with Cudi, West clarified: “I’M VERY COMMUNITY ORIENTED I LOVE MY FRIENDS I LOVE MY FAMILY THE REASON I ASKED CUDI TO AT THE LEAST SPEAK TO SKETE IS BECAUSE FOR YEARS CUDI ALWAYS MADE IT SEEM LIKE IT WAS ME AND HIM AGAINST EVERYONE NOW THAT IM FIGHTING FOR MY FAMILY HE NOT BY MY SIDE THIS IS BIGGER THAN MUSIC”.

Alongside a headshot of Cudi, West wrote: “I WOULD HAVE NEVER ASKED FOR THE LOYALTY IF IT WAS NEVER OFFERED AND I FOUND A COOL PICTURE CAUSE I LOVE CUDI AND ALWAYS WILL BUT DONDA2 IS ABOUT RUNNING BACK IN THAT BURNING HOUSE I RESPECT NOT EVERYONE GONNA BE READY FOR THE SMOKE”. 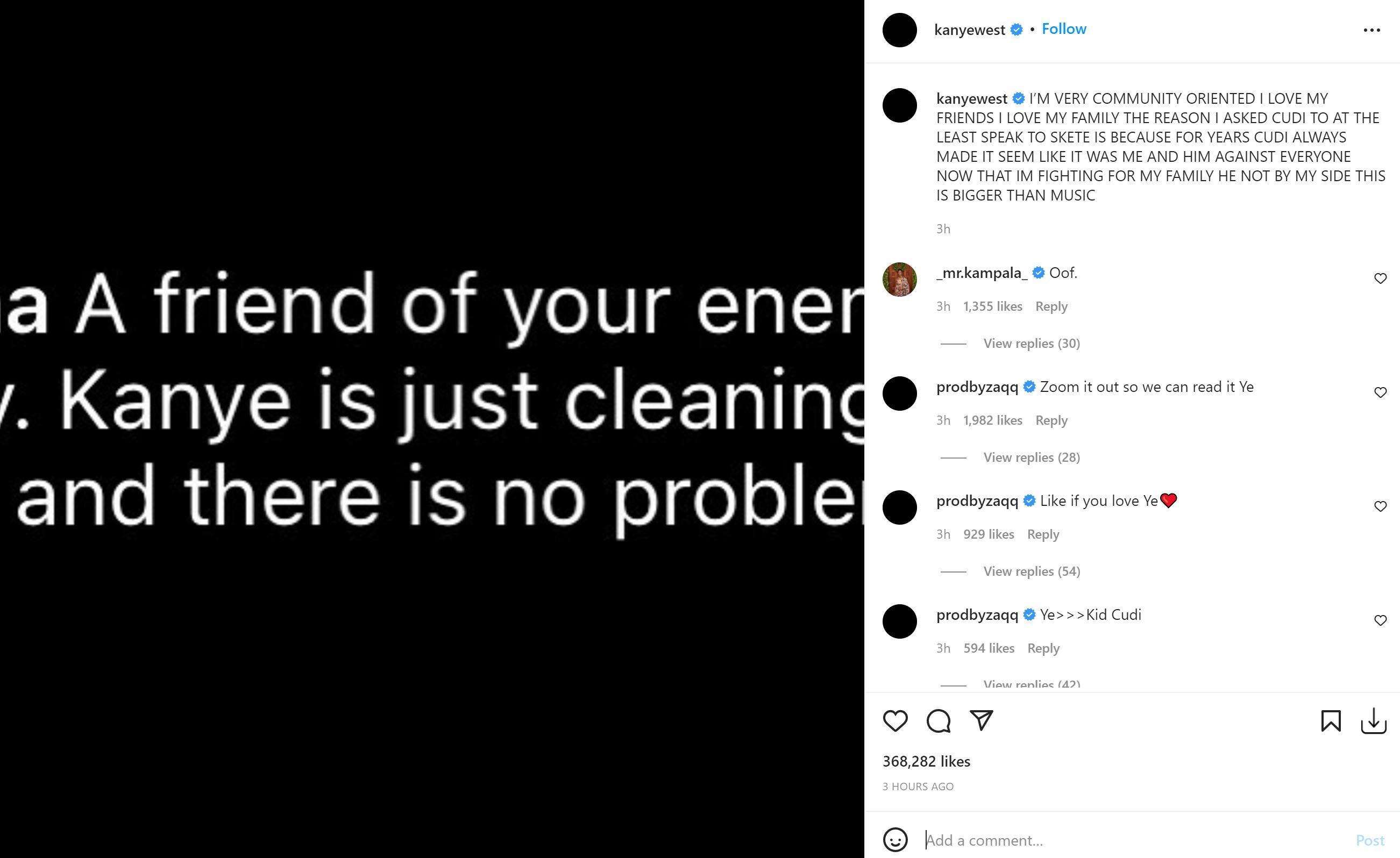 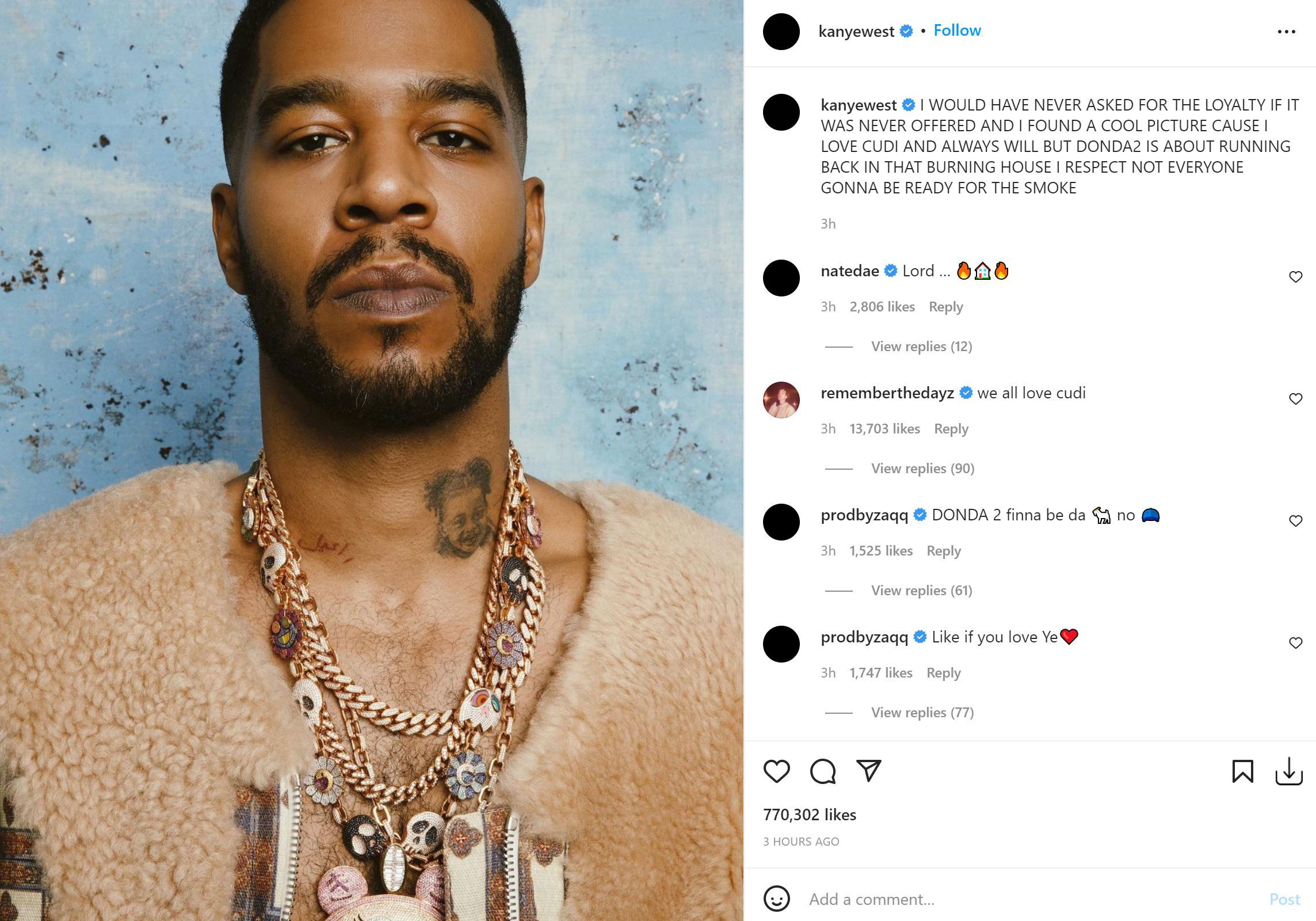 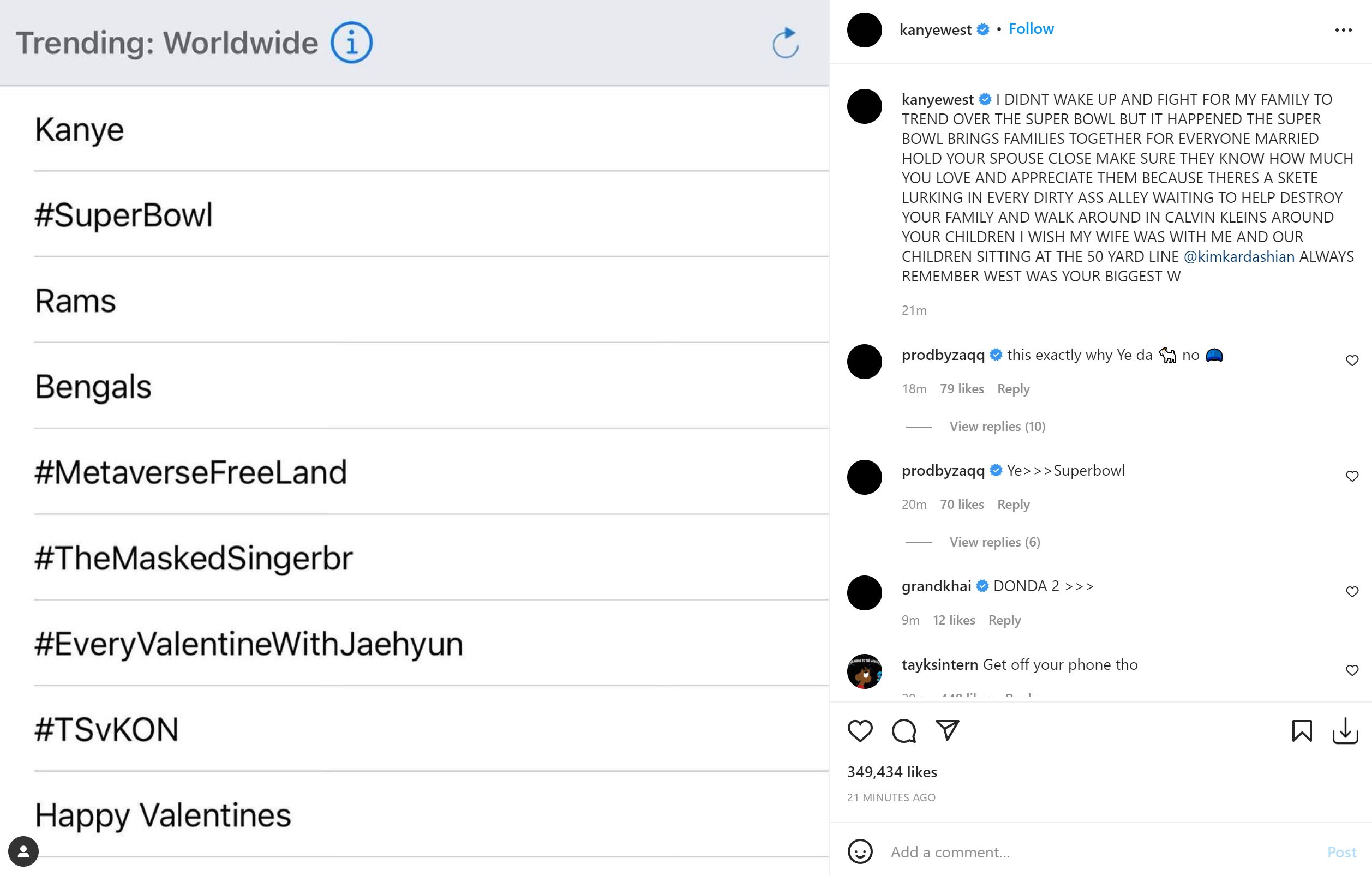 He also acknowledged his posts were a form of “fighting for [his] family” and said, “HOLD YOUR SPOUSE CLOSE MAKE SURE THEY KNOW HOW MUCH YOU LOVE AND APPRECIATE THEM BECAUSE THERES [sic] A SKETE LURKING IN EVERY DIRTY A– ALLEY WAITING TO HELP DESTROY YOUR FAMILY AND WALK AROUND IN CALVIN KLEINS AROUND YOUR CHILDREN I WISH MY WIFE WAS WITH ME AND OUR CHILDREN SITTING AT THE 50 YARD LINE [Kim Kardashian] ALWAYS REMEMBER WEST WAS YOUR BIGGEST W”.

Read More
Did you miss our previous article…
https://www.mansbrand.com/erin-jackson-wins-gold-in-speedskating-a-first-several-times-over/