The 60s was truly the greatest decade for automobile design, racing, and car enthusiasts. The decade opened with the Stingray Racer and Ferrari 156 Shark Nose and closed with the Lancia Stratos Zero and Porsche 917.

The decidedly open racing regulations of the era encouraged exploration and risk taking. Brilliant characters like Jim Hall, Jack Brabham, Bruce McLaren, the Granatelli Brothers, Dan Gurney, and so many others had the gumption and wherewithal to build their wildest visions and then drive or trailer them to the track and win.

These luminaries (and others) evolved the black art of aerodynamics into an engineering science through trial and error. Some used aluminum engine blocks as stressed members on mid-engined composite chassis, and others strapped jet turbine engines alongside the cockpit. The great kustomizers like Bill Cushenbery, Dave Puhl, and Gene Winfield thoroughly challenged our imaginations. It was an exciting time to be a car nut.

Like most child car enthusiasts, I spent the school days drawing cars and my “free time” building plastic models. In November of 1965, my parents took us to the 50th Annual Detroit Auto Show—where my mind was blown open by the Mako Shark II and Toronado.

Also on display was the Chevrolet Monza Junior go-kart, which Bill Mitchel had built for his stepson. The kart was an identical scaled down copy of the beautiful Monza SS Show Car from 1963.

A watered down copy of Mitchel’s kart could be won in a raffle at the show, so my family and I filled out dozens of raffle tickets and I spent the years to come waiting for Chevrolet to call and make arrangements for delivery. At that age, I was unable to fabricate my own go kart—let alone a real car—but the dream of doing so was firmly embedded in my psyche.

Throughout the years, I would draw up designs for various dream cars. While in college, the idea came to me to build a fiberglass body of my own design on the chassis of my ’69 MG Midget.

Some years later, I got serious and visited Caterham Cars in Surrey, England, with the hopes of putting my body on a Super Seven chassis. While working as an Architectural Model Builder in Yanbu, Saudi Arabia, during the early 80’s, I locked down the plan to base my car on an ERA GT 40 chassis.

Things did not work out well with the ERA, but with so many GT40 kit car builders around, I went forward with this idea. I drew the car up on velum in 1:10 scale and built a jelutong speed form, followed by a fiberglass model in that scale.

The essence of my design credo arose from the realization that I would never be able to own any of my favorite automobiles, most of which were one off creations or destroyed for various reasons. So I decided to take individual elements from my favorites and build a collage of (as well as an homage to) them.

The first major hurdle was to sculpt the body in full scale. I originally thought to do it in plaster a la Ed Big Daddy Roth. I even considered learning to beat aluminum—but thankfully, the use of Chavant modelling clay prevailed. I got some clay and a few tools from an instructor at ArtCenter and aimlessly played around, until one day at work, a friend of mine showed me an article about the California Camaro done by John Schinella and the GM Advanced Concept Center. ACC was just a few miles from my house!

I got an interview with John and Richard Dakins, the Chief Sculptor, who promptly offered me a job. As luck would have it, they were starting work on the Stingray III show car. My plan was to stick around for a couple of years to learn how show cars are sculpted and fabricated, then move on to another career. Well, 27 years later, I retired from GM Design as a clay/digital sculptor. 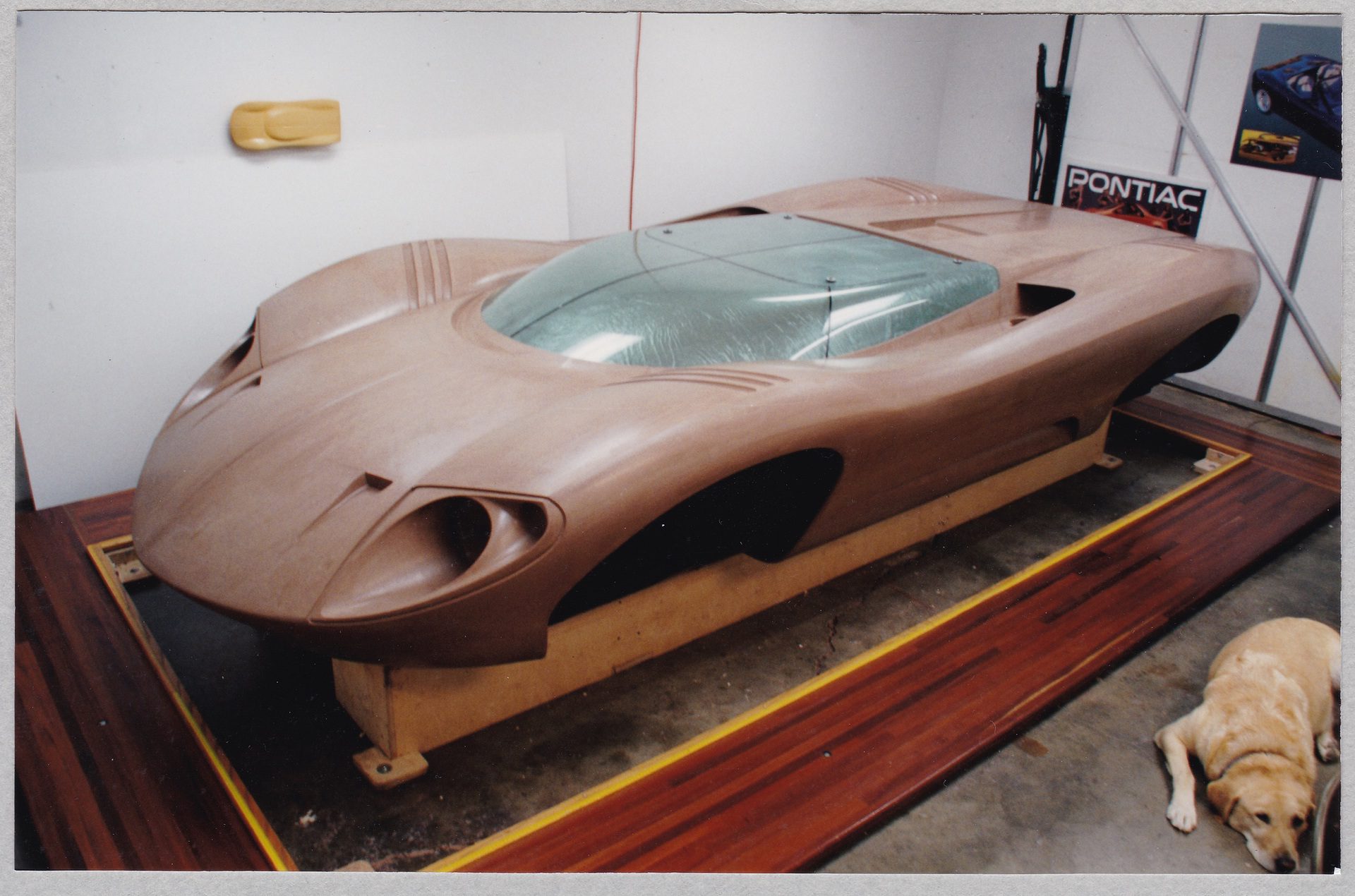 The sculpting of the body burned up several years of weekends, holidays and occasional evenings. Initial projects included building the rail, angle, and bridge system for measuring and balancing, followed by the armature and foam buck.

The clay was recycled from the Stingray III and the Impact show car models, compliments of ACC. I began by sculpting the windshield, then made a

A Conversation with John Narigi and Barry Toepke of Laguna Seca