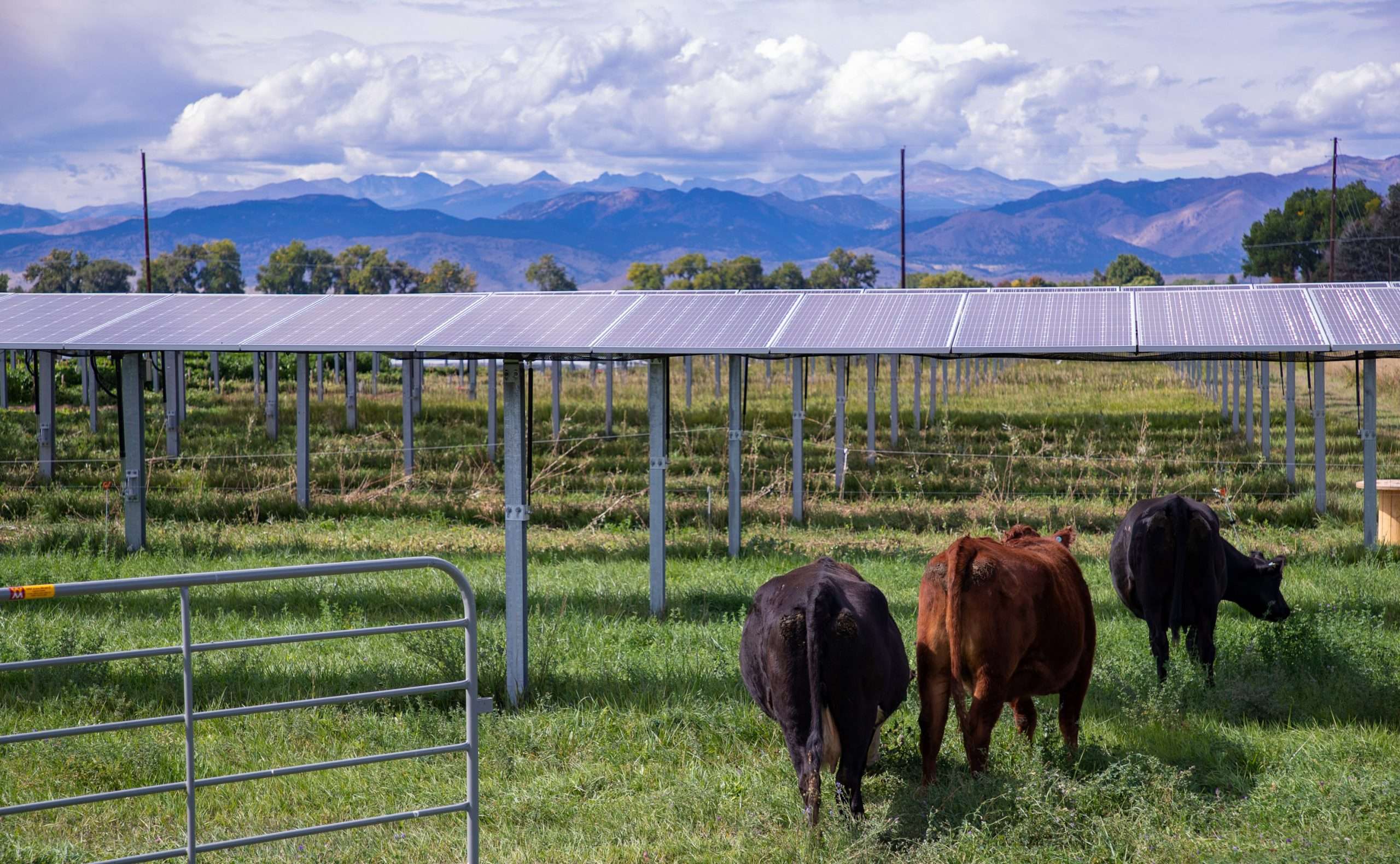 The newest crop found on the farm? Solar panels.

On a recent cool, sunny morning, Meg Caley could be found at Jack’s Solar Garden showing visitors a bed of kale plants. As executive director of Sprout City Farms, Caley has more than a decade of experience farming in unlikely urban spaces in the Denver area. Today, about an hour north of the city, she works alongside researchers on an experimental agricultural method called agrivoltaics.

Agrivoltaics is pretty low-tech. Instead of being placed 18 to 36 inches off the ground, as in traditional solar farms, the solar panels are raised significantly higher to accommodate grazing animals and to allow more sunlight to reach plants growing beneath them.

The approach could be a boon for both energy generation and crop production. Less direct sunlight helps keep plants cooler during the day, allowing them to retain more moisture and thus require less watering. Having plants underneath the solar panels also reduces the amount of heat reflected by the ground, which keeps the panels cooler and makes them more efficient. Farm workers tending the crops also benefit from cooler temperatures, as do grazing animals.

Wide-scale adoption of the practice could help reduce carbon dioxide emissions in the United States by 330,000 tons a year and add more than 100,000 rural jobs without affecting crop yield very much. A 2019 study in the journal Scientific Reports predicted that the world’s energy needs could be met by solar panels if less than 1% of cropland were converted to agrivoltaic systems.

Combining agriculture and energy generation has multiple benefits, says Joshua Pearce, a solar energy expert at Western University in London, Ontario. “The solar energy and the increased land-use efficiency is worth money, and thus increases revenue for a given acre for the farmer,” he says. “The local community also benefits from protecting access to fresh food and renewable energy.”

But researchers are still sorting out the best ways to implement agrivoltaic systems. One variable is height: at Jack’s Solar Garden, for example, scientists are experimenting with panels raised either six feet or eight feet from the ground. There is also the question of which types of plants respond best to the additional shade from solar panels.

Until these questions are resolved, agrivoltaics will remain an experiment. “Farmers aren’t known to be risk takers,” says Allison Jackson, education director of the Colorado Agrivoltaic Learning Center, which conducts tours at Jack’s Solar Garden.

It’s also expensive. While agrivoltaics could save farmers money on irrigation and electricity, or provide an extra source of cash if they sell electricity to the grid, installing solar panels is a significant upfront cost.

Despite the challenges, agrivoltaics projects are being installed around the world. According to the Fraunhofer Institute for Solar Energy Systems ISE, electricity production capacity from agrivoltaics projects grew from about five megawatts in 2012 to more than 14 gigawatts last year, amid the rise of national funding programs in Japan, China, Korea, France, and the United States.

“More research is needed for dual-use solar practices to scale,” says Peter Perrault, head of circular economy at the renewable energy developer Enel North America. “But we already know the fundamentals are viable.” 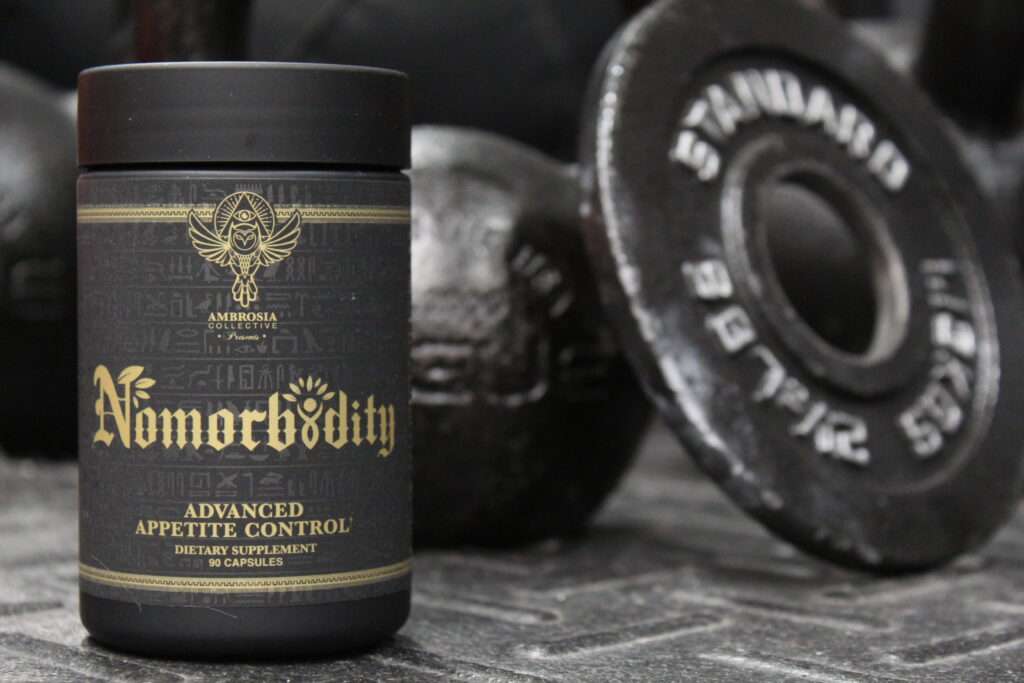 If you are struggling to lose weight, Nomorbidity may be your answer.

Anyone who has tried to drop extra pounds knows that losing weight is difficult. What many people are not aware of is that there are multiple factors that can affect the success of your weight-loss journey, and it’s not just a matter calories in vs. calories out and how much cardio you do. If you are struggling to lose weight, Nomorbidity may be your answer.

That’s because losing weight isn’t as simple as just being in a caloric deficit. Stress and hormones play a huge part in your weight-loss journey. You may ask how stress can affect your weight loss; well, there are several contributing factors. You may reach for that bag of chips, candy bar or even that tub of ice cream. High stress can release a chemical called cortisol.

Excessive cortisol levels can stimulate glucose production, which then can inadvertently be converted into fat in the body. People who are stressed out tend to experience high cortisol reactors and decreased insulin secretion.

Nomorbidity contains a particular blend of ingredients to help manage your stress and anxiety but also reduce your cravings and increase your metabolism. Now you can lose weight while you sleep.

“Works great and saves you money on groceries. I’ve used it for two months now and it is mind-boggling how great this stuff works. I lost almost 8 kgs and only spend about half on what I used to on groceries. It really makes you rethink how you buy groceries and how you eat. I do intermittent fasting (I do it because of my job and it works best with my lifestyle) and it helps me not to feel hungry until the early afternoon. I haven’t binged in two months and don’t have crazy cravings for sweets and chips. In addition I lost about 3 inches around my belly button and other body parts. Can recommend everyone to try it, for me it works wonders.” -Barbara P

“Try it. This product is amazing and does actually work. Suppresses your want to binge and snack. It also makes you get fuller quicker so you eat smaller portions. There have been no side effects. If you are trying to lose weight and find it difficult to diet due to hunger, this product will definitely help.” -Clare P

“Excellent customer service, expedient delivery to the UK. The product was packed very well, the product package is well designed with easy to understand instruction. Started using and I am excited for the results of its usage.” -Mark D

Did you miss our previous article…
https://mansbrand.com/caffeine-evolved/